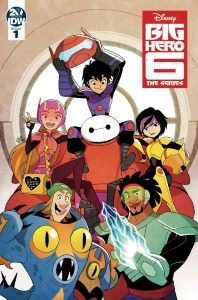 Big Hero 6 is in its’ second season on the Disney Channel and with this week’s launch of Disney+, a new comic arrives on the comic shelves as a companion to all things San Fransokyo. Big Hero 6 The Series the comic complements the show well and maintains the characterizations of the series. And while the comic does not attempt to create wider lore to the universe, it provides light-hearted character moments for fans.

Authors Hannah Blumenreich and Joe Caramagna both have experience writing on the lighter side of comics. Blumenreich wrote for the Regular Show comic and Caramagna wrote for the recent Ducktales comic. Blumenrich’s personal Spidey-zine comics demonstrate her ability to provide childhood emotions through comic characters. Their comedic timing and panel set-up help achieve the similar fast-paced scripting of the show while still providing for moments of tender care.

This issue provides two stories centered around Fred. The first shows Fred drawing and narrating his own Big Hero 6 comic adventure as he waits for the rest of the team. While this could be played straight for laughs, Blumenreich scripts the conclusion with a sense of friendship and family as the rest of the team sees how much Fred values and cares about them. The second story by Caramagna, is played for laughs and works similarly to how the Big Hero 6 shorts are in the series. A quick four-page adventure that captures the humor and action of the characters. Both stories could be quickly consumed, but also reread by young fans for continued enjoyment.

Nicoletta Baldari’s art matches the style of the cartoon and feels at home in a Disney comic. The faces of each character match nicely with the show and even include the distinctive facial shading used in the series. The artistic standout here is Baldari’s art in Fred’s make-believe comic. The hints of watercolor and color pencil create a stylish look that matches Disney’s art in the Little Golden Book line. This colorful dreamy approach continues the childlike sense of adventure that the book invokes.

This new comic series leans more toward the light-hearted humor of Baltazar and Franco, while remaining true to the source material. If this direction continues, young fans of the series and the property will enjoy having something new about their heroes to read in between episodes of the show.