BIG RUMOR: Favreau’s ‘Star Wars’ Series Set On Mandalore After The Fall of The Empire? 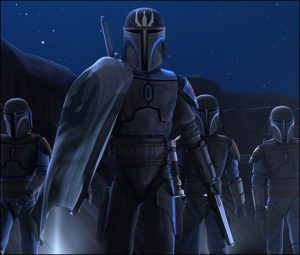 Take the following as a rumor, as MakingStarWars suggest the same in the first paragraph of their report that claims that Mandalore will be the setting of Jon Favreau‘s live-action Star Wars series.

Taking place after the fall of The Empire, as previously noted by Jon himself.

Sources believe Jon Favreau’s Star Wars live action series, which is set around three years after Return of the Jedi is about the planet Mandalore. It sounds like when the Empire falls, Mandalore falls into a state of turmoil and the series is about restoring Mandalore to its former self and how Mandalore sways will have huge galactic ramifications.

From the original trilogy’s Boba Fett, to Clone Wars’ Darth Maul, to Rebels’ Sabine Wren there are plenty of characters that have played a role in the canon mythology of the Mandalorians. A warrior culture that has been consistently manipulated by the Sith over many generations.

If you didn’t know, Favreau voiced a Mandalorian character named Pre Vizsla on the Clone Wars series and there does seem like there might be connective tissue there. However, being cautious about Star Wars reports is never a bad thing.

Have you seen this:
NEW BATMAN and superman animated series coming to hbo max and cartoon network

Omega Underground previously mentioned Lucasfilm was hoping to get production started by this film for an assumed air date by the following fall on Disney’s streaming service.

We’ll have to wait and see if this plot information turns out to be correct.