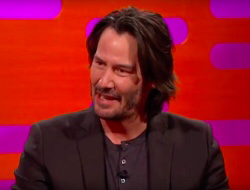 Going on the show to promote John Wick: Chapter 2, the star of the film was pressed by the host about details of the Bill and Ted sequel that has been in development since 2010. While co-star and writer Alex Winter spoke about writing the sequel on an episode of the Nerdist podcast last year, this is the first news we’re hearing about the plot.

According to Reeves, the third film finds the saviors of the future in a pretty unusual place: domestic hell. They’ve yet to live up to their potential and the promise of what they were destined to do. Their marriages are suffering and they’ve lost the respect of their own kids. Adding to the domestic issues, their lack of progress is causing issues with the timeline, which prompts an agent from the future to come back and tell them that their lack of progress is starting to effect not just the world, but the universe.

While no studio or filming date has been released, Whoopi Goldberg (Who was on the same panel with Reeves) has expressed interest in playing the role of the time traveler.

This is a developing story that we will continue to follow.
Story brought to you via The Super Powered Fancast on Twitter @superpoweredfan.