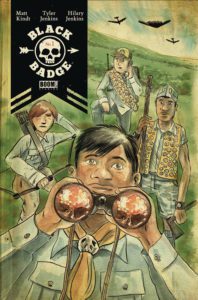 Black Badge is a new series from Boom that shows what we wanted the Scouts to actually teach us what to do instead of how to not burn your house by boiling water. The story centers on Willy joining an elite group so he can achieve the last and fabled Black Badge. The question that keeps popping up is how to gain that badge?

Matt Kindt and Tyler Jenkins create a narrative that builds the suspense for Willy as he enters into unknown territory. Jenkin’s art fits perfectly with the story as it portrays the uneasiness Willy is feeling with what he has gotten into. The looks for the scout uniforms that Tyler creates gives them familiarity yet holds a secret.

Kindt characters are established well with already defined traits. The biggest downside is that these character traits have been created multiple times before, with the most recent incarnation being Deadly Class. Hopefully, like with Deadly Class, the story will end up flushing out the overused troupes and gives each character an original voice.

Black Badge is unique in the settings and idea of the story and if they can overcome the hackneyed character personalities then this could be a potential hit for Kindt and Jenkins.