Black Bolt #1 Review with live commentary from the signing with Saladin Ahmed. 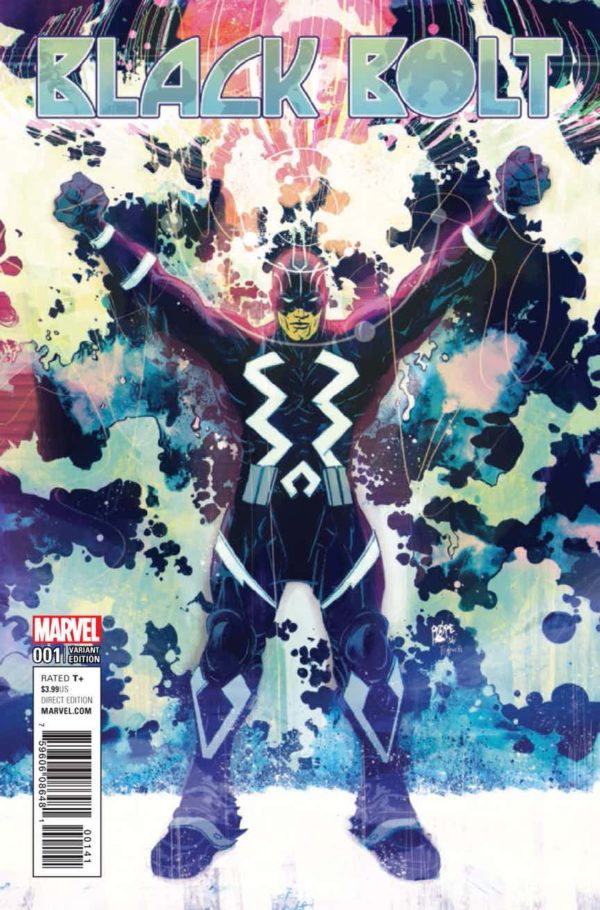 I think there is always a level of trepidation when a new writer takes over a beloved or favorite character. In this case its Blackagar Boltagon, he has found incredible success in the care of names like Hickman, Bendis, and, Soule, some of the most capable and respected writers in all of comics. Then word broke of Blackagar finally receiving his own long overdue series. Immediately there is a sense of euphoria and excitement when conjuring the possible tales and adventures on the horizon for the Inhuman king. My mind almost instantly began considering which wise one in the stable of Marvel writers would handle the glorious tales of one of my favorite comic heroes.

The answer would be none of them but instead a fresh voice and vision from beyond the confines of their current lineup of talented writers. Saladin Ahmed was announced as the writer that would guide Black Bolt through one of the most challenging periods of his comic life. I myself was somewhat aware of the talents of Mr. Ahmed and his prowess with sci-fi as exhibited in his first novel Throne of The Crescent Moon. His initial novel was met with acclaim and garnered a nomination for the Hugo award and took home the Locus award for best first novel.

Meeting The Man Behind Black Bolt

Fast forward a few months and I found myself standing in line for Mr. Ahmed’s Black Bolt #1 signing at my local comic haven, Green Brain Comics. I decided to purchase two copies, one was the default cover which I would read and the other was a hip hop cover with Black Bolt playing the role of Pete Rock. This was the copy that I would have signed by Saladin Ahmed and lock away from oxygen, dust and all else that would erode its majesty. I was in full geek out mode waiting in line and filming as much as I could on the periscope app which I have included below all while trying to avoid the line that sends one into the obnoxious zone.

Once in front of Mr. Ahmed he shook my hand, asked my name and then began to sign the cover. Though before he could start he picked up the comic and genuinely geeked out at the hip-hop cover and stated how this was his first chance to see this cover in person and he loved it! He talked about how much Pete Rock he listened to when he was younger, I’m convinced we could have talked 80s and 90s rap for hours but the line persisted with eager fans. For that moment he was no different than any of us in any comic store across the world. He wasn’t the award-winning Muslim American writer from Dearborn, he wasn’t the guy with the shoulder length locks of Odin. He was someone that was just transported to years bygone listening to Pete Rock rip the mic up. For a quick moment, i think we both heard the jazzy smooth beats and lyrics of “When they reminisce over you” In an instance, in only a couple seconds that cover reached through every societal chasm, every demographic and indeed through time itself. On a regular Wednesday in Michigan everything that we love about comics coalesced like the swirling of time and space itself caught in the immense gravitational pull of a world eater. It was a brief moment that I won’t soon forget and It was at that moment that I knew that Blackagar Boltagon was indeed in good and worthy hands. I asked him his thoughts on guiding Black Bolt through what feels like the most tumultuous and trying time of his existence. You can see his answer in the video below. 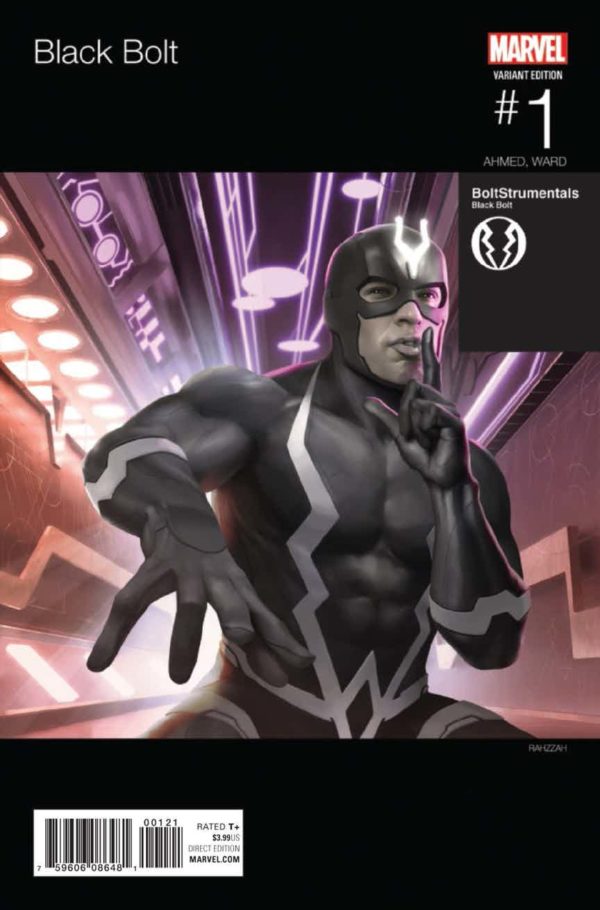 More from GWW
Batman and The Outsiders #14 (REVIEW)

We find Black Bolt at a time that he has abdicated his throne and now finds himself in a position no king should be in. It is through this lens that Ahmed begins the journey of Black Bolt, slowly and shackled. Through this first issue, we are given the details of how Black Bolt currently finds himself in this conundrum but more importantly, we are able to peer into the mind and perhaps the soul of a very guarded king. We witness moments of heroics that we are familiar with but we also find an unsure, and an ultimately terrified Black Bolt. For a being that has known the greatest powers in the universe, a bout of insecurity is something totally foreign to him and therefore all the more terrifying. Keep in mind what Blackagar has faced, he has endured and at times caused the destruction of entire Universes. He has held the limitless power of the purple Infinity (space) stone and wielded it without hesitation or remorse in the name of protecting his people and the universe they inhabit.

He has sat with the most powerful beings on the planet and crafted the fate of universes. He has battled all powerful beings like Kang the Conqueror across time and space and indeed against his own son. All of those victories mean little in his current predicament and serve only as a reminder of how low the king hath fallen. Ahmed manages to tantalize us with foreshadowing of what Black Bolt must ultimately prepare himself for. What Blackagar finds himself in is a perilous psychological struggle the likes of which he has never faced. Add on to that the blunt instruments dead set on making sure his stay is a painful one and you begin to understand the die that has been cast. 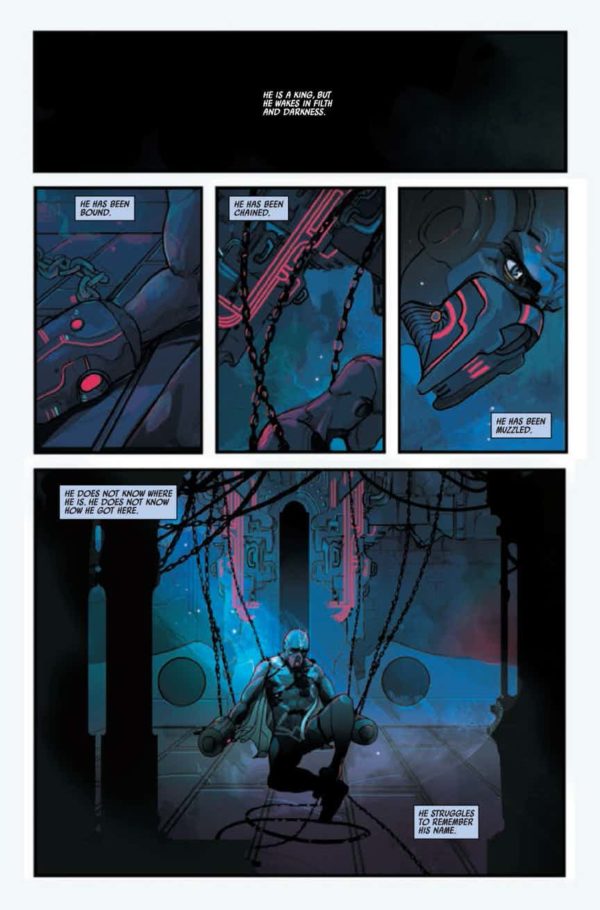 If Black Bolt is seeking redemption Ahmed isn’t going to make it a path of leisure, he will prove himself worthy of his cosmic regal 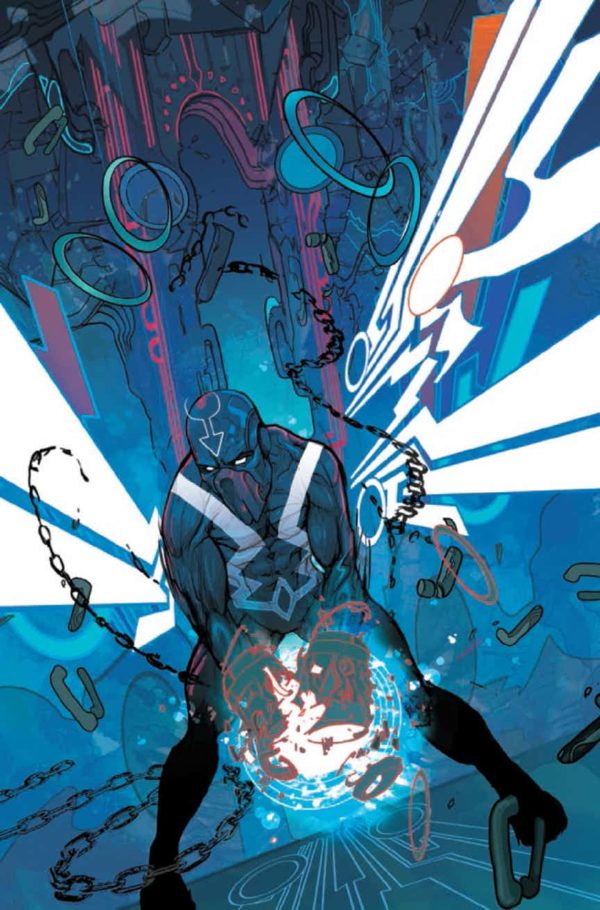 birthright or be broken completely trying. I am eager to see the mettle of the exiled king tested and if he will find his way back to regalia or if he will need all the king’s men to put him back together again. No matter the outcome we can be sure that it will be a glorious spectacle worth beholding with Saladin Ahmed at the helm. I arrived with high hopes for one of my favorite comic characters. What I left with was a profound appreciation for a local man that does what he loves. That simple but vital fact should fill comic readers with glee and anticipation for the far-flung crafted adventures awaiting Black Bolt just beyond the event horizon.

Ahmed sets the tone perfectly, taking Black Bolt to places we have not often seen him. The challenges set before him are daunting but Ahmed shows there is still strength of will within the once and future king of the Inhumans.