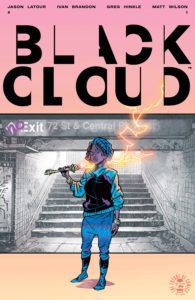 Black Cloud from Image Comics is written by Jason Latour who is the artist on the brilliant Southern Bastards comic book series. So Latour’s art and storytelling definitely has my attention. I went into this new series as cold as possible, I had no clue what it was about. Even after reading the first issue, I still don’t know what the heck is going on. Despite being exposition heavy, very little is given away.

The issue centers around a woman who is only referred to as Ms. Barrett. She narrates most of the issue but I never quite grasped what makes her character tick. She is clearly having a rough life despite being able to use magic. We see her asking for money and sleeping on a bench. The intro to the comic and the way they call her “oldblood,” implies she’s part of some ancient magical lineage. I just wish I had a better clue about who she was as a person. She felt like a blank slate to me, even after I finished reading.

In order to scam a couple rich kids into buying pills, Barrett takes a man named Todd to a magical black and white realm. The animal/humanoid creatures seem to know who she is and that she brings trouble. This sequence was the strongest part of the issue, it leaves you wondering: where the hell are they and what’s going on. There was some really fun world-building going on. It does reminds me somewhat of Fables, where there was a magical realm that the human realm knew nothing of, but that’s about as far as the comparison goes. 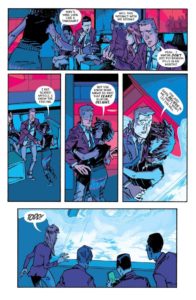 The art was great, it felt a lot like Southern Bastards, even though I believe Latour is only doing the story. The characters and background were never boring, and packed with interesting details. The magical realm’s creatures all looked good. I loved how the lizard boss started out as one of the few characters in color but then Barrett splashes her drink on him and now part of his face stays black and white. The whole issue looked fantastic and fit the story well, even carrying it at times.

I don’t need everything to be explained to me from the get go, but I would have liked more reasons to care about Barrett or the mysterious plot, I never fully connected either. Even so there is a lot to be intrigued about, and of course the cover gives away the fact that she may become a warrior of sorts. This may be one of those introductions that reads better after you read the next few issues.