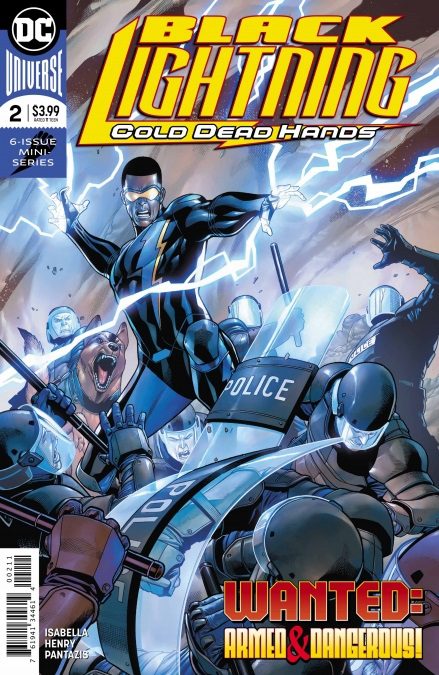 The new issue of Black Lightning continues the fight against new hi-tech weapons being sold in his town. I enjoy how they have Jefferson Pierce return as a hero pushed in a tragic direction where he blamed for murdering a group of men that were to be arrested and it was all orchestrated by Tobias Whale, a known criminal who is feared by many. The issue does a good job showcasing Black Lightning’s powers as he decides to launch himself through the air off of a police car. The joke about landing was great as he is a guy that can’t actually fly and doesn’t have super strength so if he lands wrong, it could go very badly for him.

I will say one of the biggest highlights of this issue is we get to see more of Pierce in his civilian life as a teacher. It’s always a great moment to see a person who tries to balance being a superhero and having a regular job. One of the best things Tony Isabella does with this book is he embeds a message about caring for the city you live in, especially if it’s somewhere you came from and grew up in. There is also a strong theme going throughout this book about how we all look at heroes and how we can handle our own situations. 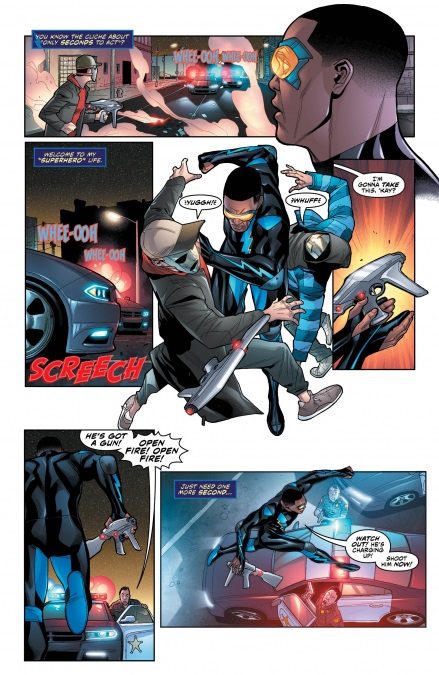 The political topics of the issue are touched on lightly enough to bring awareness to readers with the main topic being relationships with civilians and police officers, and mainly with how situations are handled pertaining to black citizens. It never preaches too hard on this but we still have these thoughts going through the minds as we watch Pierce but he doesn’t let it prevent him from stilling going out and helping his city. The end of the issue leaves us with the consequences of the new hi-tech weapons being sold through the streets and more importantly, it speaks to how we are all responsible for our decisions and how they can affect anyone around us. Even though the weapon used causes a bit of an extreme end result, you can still understand the severity of an accident like this happening even with a regular gun.

Black Lightning is showing us a hero who wants to bring peace in a city he loves while at the same time help those who live in it with his day to day job. I hope for him to be used as an eye opener for the community he lives in and for the readers. As he teaches the students at his school, hopefully his lessons can get to his readers.