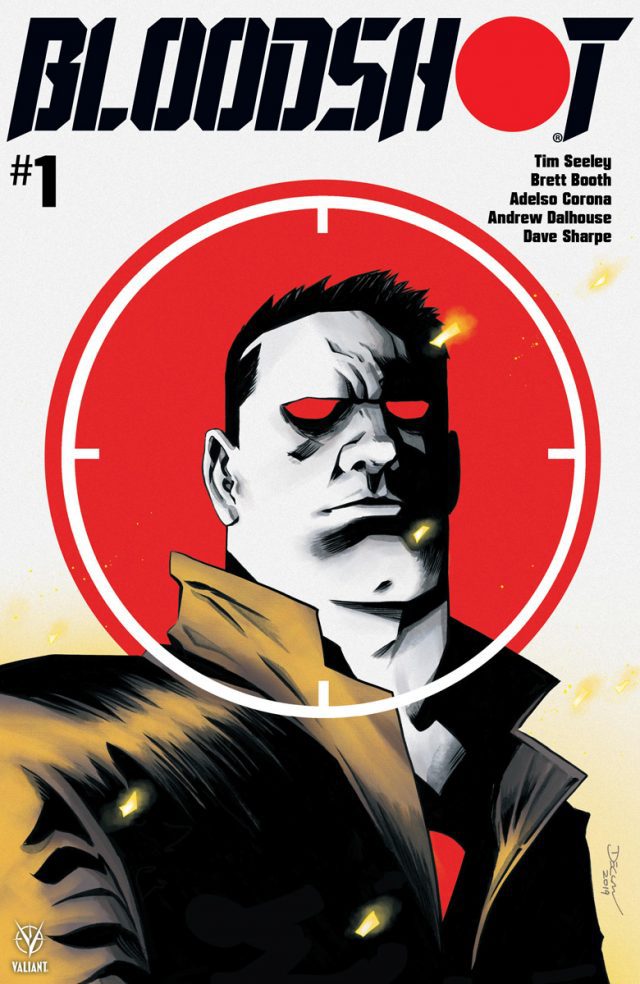 Bloodshot is a nanite-fueled super-soldier forever at war. What happens to the world when he starts picking his own battles?

Will this one-man army be able to end the fighting—or just leave more destruction in his wake?

Valiant is gearing up for the Bloodshot movie. The Sony film, starring Vin Diesel, is set to hit theaters in February of next year. In preparation for the film’s premiere Valiant is relaunching the character with a brand new ongoing series. So how does this new offering stack up?

The story is lite on details and heavy on action. This first issue is far more interested in showing you how Bloodshot’s powers work in the middle of a war zone than providing any information to new readers about the background or motivation of Valiant’s militaristic Frankenstein.

While there is action and gore aplenty in this issue, for some odd reason Valiant tones down the language… which seems very out of place. Instead of just going ahead and saying the word “fuck”, the publisher instead went soft with “frickin’” and “effing”…mind you that on the same page Booth has drawn a solider getting his face shot, with the bullet’s trajectory going straight through the man’s cheek! They can show people getting blown away with gunfire, dying in explosions, Bloodshot himself a charbroiled bag of muscles and gore, but for God’s sake don’t drop the F bomb…readers can’t handle it!

All kidding aside, the choice to focus so heavily on the military action and showcasing Bloodshot’s extensive power set, while effective in introducing the tone and pacing of the series, doesn’t make the reader give a damn about Bloodshot or distinguish the character from dozens of other tough guys that line the comic racks. This could have just as easily been an issue of Punisher or Wolverine.

The hook for Bloodshot has been his abuse at the hands of the government/military that have left him a psychotic mess. Past series have delved into Bloodshot’s hallucinations of memory implants; ghost images of family that never existed, who play out the moral implications of Bloodshot’s actions. It gave the series weight and set the character apart from the pack. Now in this installment he just feels like a relentless killing machine that is on the side of angels… which readers have been bombarded with since the popularization of the anti-hero almost 40 years ago.

In fact, Seeley has spent more time in this issue establishing the new face of the enemy; a government sponsored, covert group of mercenaries that are tasked with taking Bloodshot out, called Black Bar. The actual origin of Bloodshot himself is regulated to one splash page that tries to shoehorn in the character’s entire history. It feels uneven and forced. While this issue proves that Seeley can write one hell of an action sequence, it doesn’t have that vital first issue hook to keep readers coming back.

While the story was focused on action, it lead into one of the issue’s stronger elements. The art. Brett Booth is a throwback to the early days of Image. He’s survived decades in the industry by being able to depict action. This was a title custom built for an artist like Booth. My one complaint about Booth is the same complaint that I have had for years with the artist, and that is his style leaves all the character’s faces looking eerily similar. Everything else is top notch. The pacing, the panel breakdowns, the page layouts, the art tells the story without needing the dialogue. That’s the sign of a great comic book artist.

The rest of the creative team successful do their jobs. The inks, colors, and letters are all pro-level quality. The colors are bright and well lit, the inks are on point and not over-saturated, the lettering provides some nice sound effects when it comes to the sounds of the chopper and Bloodshot singing…you’ll see.

Everyone did their jobs, pulled their weight and made the comic look great!

The main ingredient that was lacking in this new debut was heart. There is nothing to latch onto that will make readers want to invest their money and time in the further adventures of a nanobite fueled Rambo knockoff. The government trying to track down a killing machine of their own making is not a new concept.

Hell! A good portion of action movies from the 1980’s and 90’s were endless retreads of that very concept. Here it just feels like more of the same.

If Valiant wants to push Bloodshot back to prominence within the comics industry it’s time to look deeper into the character and start dissecting what really makes the man behind the monster tick. Earlier this month Valiant released Bloodshot: The Definitive Edition which collected the first thirteen issues from the 2012 series. This is a better intro to the character. While this 2019 comic has a decent action story it’s lacks the emotional weight of previous installments. I hope that this book quickly finds its feet and gets headed in a new and bold direction.

Bloodshot Valiant
Are you an Insider?News, reviews, & updates are just the beginning.