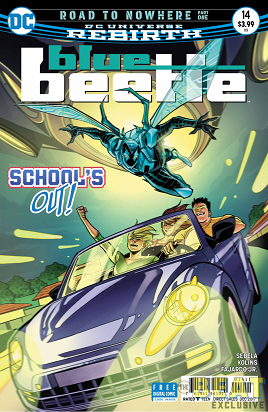 Jamie Reyes has returned from the 30th century. Ready to be an all-new hero! In the last issue, we saw Jamie go to the future, where he met the Justice League 3000 team.

Jamie finally got his date with Naomi. The two go to see a cheesy horror movie. As they are leaving, Naomi wants to talk about them and their relationship. The next day, Jamie heads over to Kord industries to work with Ted. It’s revealed with the Blue Beetle Scarab, Jamie can bench about 20,000 pounds without trying too hard. 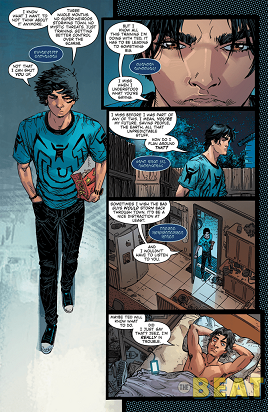 Ted is going away for a week and gives Jamie some money, telling him to take the week and think about his future. Jamie texts his friends, it seems the gangs going on a road trip.  The rest of the issue is them bonding, arguing, and trying to figure out growing up together. Towards the end, the group runs into what appears to be aliens. Jamie suits up and takes the fight to them.

This issue is the first under the new writer. It has a nice shift in tone. More focus on Jamie being a teen trying to figure out his future. Along the way, he has to hide the fact that he is blue beetle from Naomi. This book has been a sleeper hit, and this just reminds me of classic comics. A simple kid with powers, trying to figure out what he wants to do.