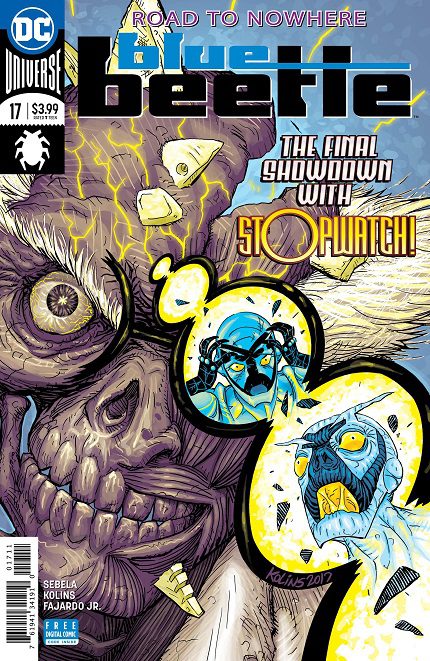 Jamie and his friends have been traveling the roads on a friendship road trip. Last issue we learn Jamie’s two friends are dating, but more importantly, Jamie fought a man who is a living Time machine.

As Jamie and the new villain fight, we see him bring back different things back in time. Jamie’s friends are attempting to escape and Jamie and the scarab do their best to hold off the living Time machine. The fight causes a building to explode, landing on Jamie’s friends. Just as he beats this new villain, time begins to unwind and go in reverse. With his friends saved and all of the bad guys locked up, it seems Blue Beetle has saved the day. His new girlfriend Naomi has found out Jamie is Blue Beetle and attempting to come to terms with it. The four head home and their road trip has come to an end.

This issue was the end of an arc, it felt a bit rushed. There wasn’t to much plot to tell as a good portion of this book was the fight. I enjoyed it but only as big fan of the character, It’s one of the weaker issues in the rebirth run. The art is solid and the dialogue was well done. I’d really recommend this arc only to passionate fans of the character.