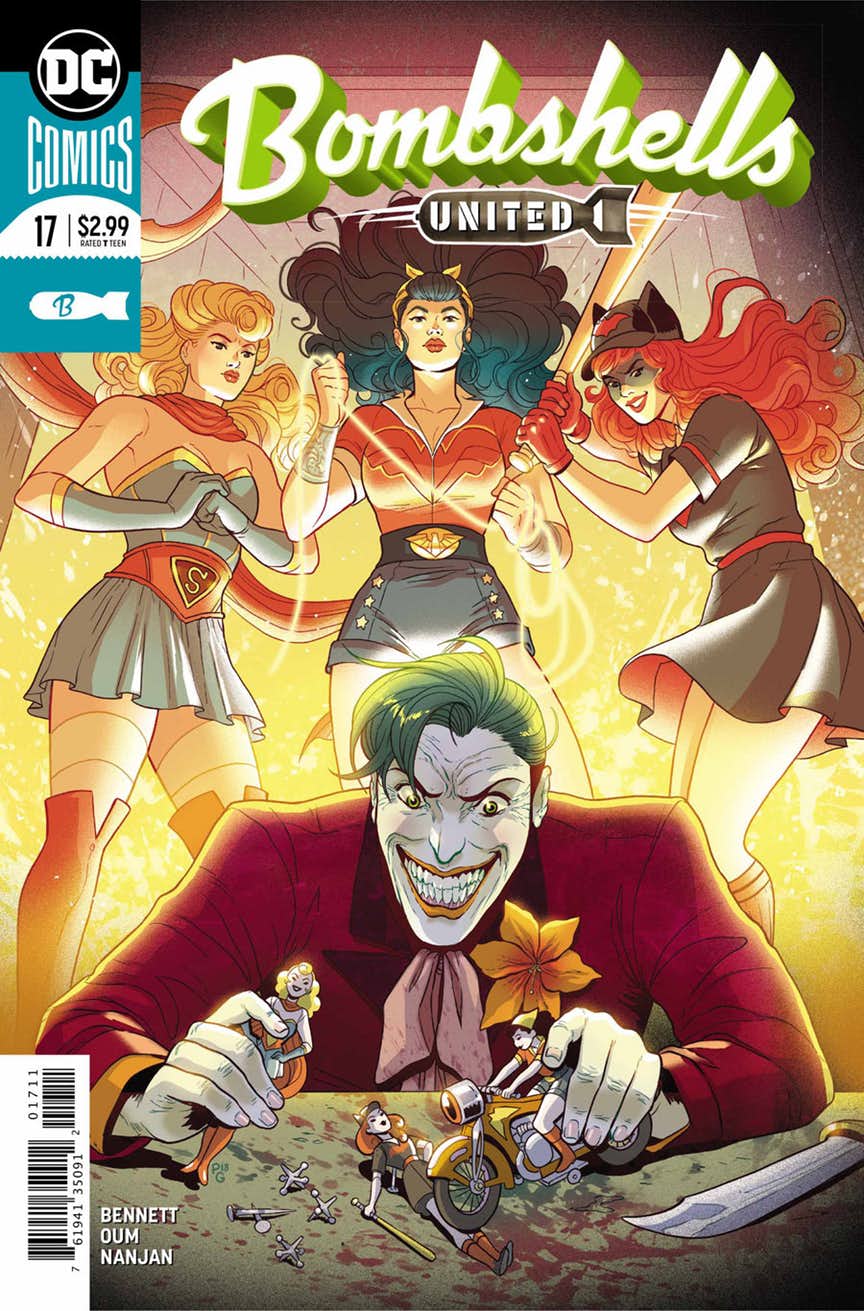 The Bombshells return fighting the good fight against an invasion from the Apokolips ship in Marguerite Bennetts: Bombshells United #17. The bombshells are facing a worldwide invasion from the ruthless queen above the white, returning to earth for her own personal vengeance. Meanwhile, the Jokers daughter is busy concocting a scheme of her own to envoke the clown prince of crime. The bombshells are scattered, the invasion draws close and time is running out for our heroes.

Bombshells United has slowly gained momentum since its first issue and brings together a host of our beloved DC characters set in the 1940’s. From the opening panels, this issue sucks you into it’s 1940’s world with a radio broadcast announcing the bombshells defending earth. An excellent way to kick-start this fabulous issue and sets the tone perfectly.  We see Wonder Woman learning the past of Lex Luthor and confronting both him and the white queen. The artwork by Siya Oum is as ever stunning and truly captures the pre-war era. Along with Marguerite Bennetts impeccable timing, these two are a dream to read. I really enjoy seeing how the characters from DC comics lore are introduced and used in this series and this issue continued to satisfy. Gorilla Grodd, Zod, and Brainiac are present but the real threats here are the white queen and Joker. Early on the issue reveals a secret cosmonaut program was created to learn more about the ‘people beyond the stars.” Lex Luthor’s sister Lena had volunteered to be the first to use this and becomes lost amongst the galaxies. It’s a heartfelt set of panels that this covers and was executed brilliantly. The affections between Lois and Supergirl grow stronger as a result of this and is a joy to behold.

One of the main reasons I like bombshells is its art design and I love the Jokers daughter cabaret look in these. It’s one of those comics I can’t wait for the next page to see who will come next and how it’s integrated into the 1940’s. This leads me to talk about how much I love the use of the flash in this issue and the panels on page 14 are a fine example. She dart said across three separate panels in a lightning flash then stops to wink and rushes off again. I admire this kind of creativity and it’s a great use of the character. One of my favorite bombshells design is vampire batgirl who is present aiding off the Jokers daughter with Harley and Ivy. There’s a very subtle but impactful panel of Ivy defending Harley from the Jokers abuse I found really enduring. The issue covers the globe in locations such as Germany and Australia but never loses grasp of its direction. Its pace is split between the impending onslaught from above and learning more about the secret cosmonaut program. It’s split in a way that works and doesn’t feel like it’s jumping from one to the next but rather flows in between. The end of the issue returns to Wonder Woman and Lex Luthor and a climatic ending that makes me need to read Bombshells United #18 yesterday.  I can’t wait for more this issue was a gem.

Have you seen this:
Geeky Slot Machine Games