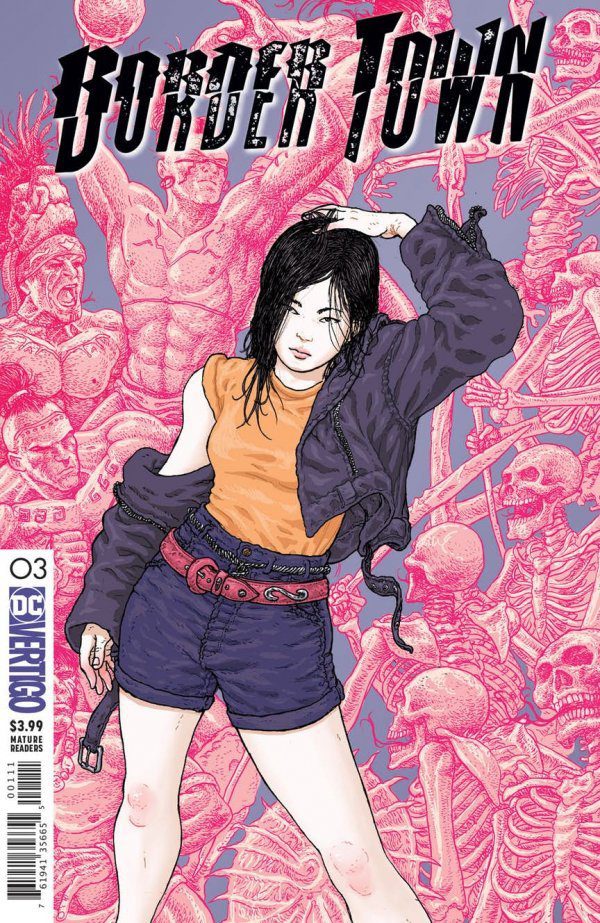 “There was a time” Border Town #3 begins, “when this land was unspoiled by borders, fear, and hate.” This line works in two ways. In the context of the issue, this line refers to the histories and cultures of the Aztec empire before colonialism wreaked havoc on their people and their empire. This history is infused with a touch of the supernatural as Mictlāntēcutli and Mictecacihautl (king and queen of Mictlan–land of the dead) offer their secrets to improving human life in exchange for sacrifices. At the same time, this line feels entirely contemporary–a harkening to a different time, before 2016, when fear and hate seemed less rampant. This blend of ancient myths and contemporary politics mark all of Border Town and issue #3 is no exception.

Border Town #3 is all about monsters: the monsters of Mictlan and the more quotidian monsters sitting in our classrooms, policing our communities and managing our schools. For the first half of the issue, Frank, Aimi, Julietta, and Quinteh are completely occupied with their concern about the monsters from Mictlan. But, as the issue unfolds, it becomes clear that the scariest monsters of all are not the inhabitants of Mictlan. The scariest monsters are the ordinary humans–the vice principal, the zealous ICE agents, the violent father–consumed by hate and fear. I wish this comic didn’t feel so perfect for the moment we are living in, but it does and I appreciate it all the more for that.

One of the many ways Esquivel’s writing in Border Town succeeds is his insistence that embracing and celebrating the particularities of diverse identities is a powerful and effective response to the monsters of our world. Near the end of the comic, in a jarring series of panels, Aimi carves ancient Aztec glyphs onto her face as a way to ward off monsters. It’s a powerful moment of catharsis and a sweet bit of irony as a disgusting character, who is unquestioningly a monster, is rebuffed by the traditions and symbols of cultures he mocks and despises. In this political moment we live in, this scene feels impossibly optimistic. I found myself longing for an artifact, a tradition, a symbol, anything that might ward off the monsters in our world.

Villallbos’s art in this issue is frequently grotesque, but even at its most grotesque, it remains beautiful. His organic style and eye for little details shine through in nearly every panel. In this issue, his inclusion of a particular football jersey and a particular portrait make perfectly clear who the monsters of our world are. His ability to capture the broader strokes of these characters’ monstrosity serves the issue and its themes well. Border Town remains one of the most vibrantly colored comics today. Bonvillain sets many of the panels to red, orange, and yellow backdrops which lend the issue a distinctly Arizonian feel. In the foreground, she widens the palette to include greens, purples, and blues creating panels that are a delight to look at.

I don’t know if Border Town #3 can ward off the monsters in our world. I do know that it’s a wonderful celebration of diverse cultures, histories, and traditions. For all those who dream of a world better than the one we live in, this series (and this issue) is a must read.