From Black Fawn Films and Breakthrough Entertainment, the team that brought you the smash indie hits, Bite, Let Her Out, Bed of the Dead and Antisocial, brings you  The Heretics. 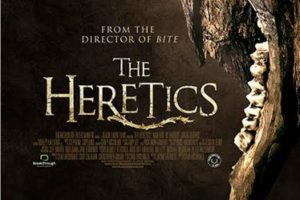 The official trailer for The Heretics is here; starring Nina Kiri (TV’s The Handmaid’s Tale, Let Her Out), Ry Barrett (The Drownsman, Neverlost, and The Demolisher) and, with a breakout performance from Australian new comer Jorja Cadence. The Heretics was produced by Cody Calahan, Chad Archibald and Christopher Giroux with cinematography by “Bed of the Dead” director Jeff Maher.

Director Chad Archibald said, “This film has been a journey and we’re excited to finally be sharing it with audiences across the world. This trailer kicks off a slew of exciting announcements that will be coming in the next few weeks.”

Following the success of BITE, Chad Archibald returns with writer Jayme LaForest to create a film that’s a mixture of cult possession and body-horror. The Heretics follows a young girl, Gloria who is abducted by a man, after he claims that a cult is hunting her. As Gloria begins falling ill and undergoing frightening transformations, we realize that the cult isn’t the only thing that she, or her captor needs to fear.

After a successful industry screening at the 2017 European Film Market and sold out World Premiere at The Canadian Film Fest in March, The Heretics is currently on its worldwide festival tour with a number of festivals being announced in the coming weeks. The Heretics is Black Fawn’s eighth film in the initial series of films with Breakthrough, following a recent renewed commitment for more films that will feature increased budgets and a more aggressive casting strategy. Pre-production for Archibald’s next feature entitled “I’ll Take Your Dead” has already started.

Owen Kelly, International Sales & Acquisitions Executive – Feature Films at Breakthrough Entertainment said, “After two packed screenings in Berlin and Toronto, it is exciting that the full trailer is now ready for release to mass audiences. Horror fans were treated with a teaser in March but we can build the anticipation for the film even further with this bone chilling trailer.”

Have you seen this:
Marvel Studios is Developing an 'Illuminati' Project

Black Fawn Films Breakthrough Entertainment Horror Horror Movies The Heretics
Are you an Insider?News, reviews, & updates are just the beginning.