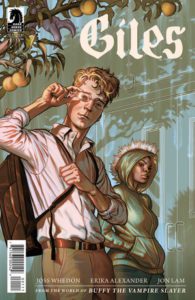 Giles #1 is a brand new comic part of the Buffy the Vampire Slayer world. Our setup has Rupert Giles going to a school to figure out why people are disappearing while pretending to be a student there. Even though I have almost no knowledge of this world, I find that I am still able to jump in spin-offs that could get me interested in the main line of work that it’s from. Unfortunately, I found the first issue of Giles to be a bit dull and unfocused. The introduction of Rupert in the issue seems to have the idea of you already knowing whom he is which I can understand. It’s just that as it went on I didn’t feel like I was learning much about him outside of being a vampire hunter and at times seems to be a bit uncomfortable in certain situations. We also meet a girl named Roux who Rupert keeps running into and they end up working together to figure out what’s going on at the school. I find her to be a tad bit more interesting but we’re only given just enough information about her.

I think one of the downsides of this issue is how I found myself to just be bored with Rupert and the premise of the story. I can get interested in 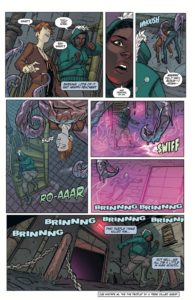 mysteries but the issue seems to jump around a bit and some of the dialogue between Rupert and Roux just comes off forced and unnatural. These moments specifically were supposed to come off as jokes but I didn’t find them proper given where we were at with these two. I would have to say the best part of the issue is easily the art. Characters are drawn well and I’m assuming Rupert is drawn close to what he usually looks like form the Buffy world. I really enjoyed some of the coloring, especially when Dan Jackson was using a certain shade of purple that was basically used to show off some type of magic manifestation.

In the end, though, I didn’t find myself really grabbed by our characters or the story that is brought to us. Perhaps fans of this world can find something they will like about it, but even at that. I think the introduction of the plot wasn’t executed strongly and sadly leaves me not wanting to continue on.