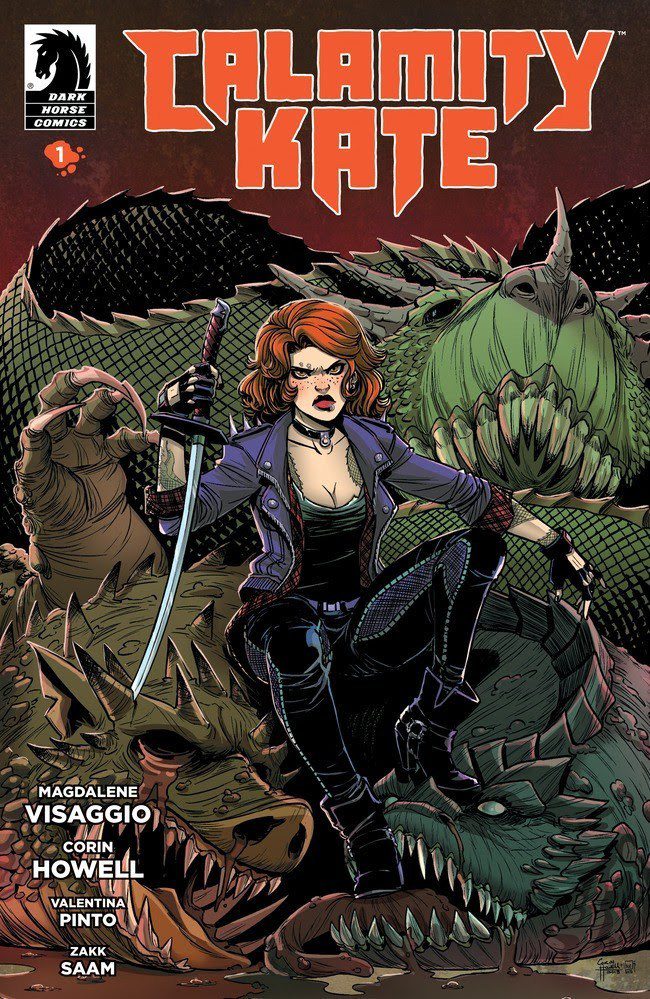 We all have that friend or family member that we haven’t seen in ages; we know we love them but would hate to live with them. That dreaded houseguest that we fear if that if we let them through the door they will never leave. Kate is that houseguest. Sure, she is top notch monster hunter, but the best roommate she is not and in issue number one from Dark Horse we see all this play out firsthand for Kate’s poor sister Vera.

Vera is just trying to get by, it’s been three years since the death of her husband and she is now a widowed single mother trying to raise her superhero worshipping daughter. Life’s been tough for Vera, but it gets a lot more complicated with the arrival of her long lost sister Kate, who is in Southern California to hunt some monsters. She just needs a place to stay for a few weeks… well, that was six months ago.

The tone of this comic is altogether different from the usual offerings that have graced the comic racks. It’s playful, funny, insightful, and has its moments of heart. It ticks all the boxes of a successful first issue by setting the table for a potentially fun series that will keep readers invested and coming back for more. Kate is that lovable loser who has a gift for killing things that go bump in the night, but as far as being a responsible and reasonable adult in any other area in her life she fails miserably. Her marriage has failed, her dreams of a happy life left with her wife, and Kate has decided to drop everything, head to Los Angeles, shack up at her sister’s house, and fight monsters when she’s not taking up space on the couch.

Kate knows that she can be an inconsiderate brat, but that doesn’t stop her from ignoring everything and everyone to pursue her dream. It sounds like a lot of dreamers that head to L.A. in pursuit of fame and fortune, no matter the cost. As Kate’s notoriety rises so does her aspirations and at the end of issue one, she is convinced that she can take on a mythical cabal of beasts, “ The Seven Fabled Beasts of Yore”, the root of every monster and creepy crawly that has ever lived.

Now if she could just be bothered to pick up her dirty laundry off the floor, wash some dishes, vacuum the carpet, and just take care of the basic upkeep of her sister’s home.

Visaggio has proven once again that dialogue and pacing are her strong suit. The issue reads smooth, the conversations between the sibling sisters are believable, and once you get a couple of pages in you’re hooked; the true hallmark of a great writer. I don’t see this changing anytime soon.

As good as Visaggio’s writing is I really want to tout the artwork of Corin Howell. Corin has been on my radar for a while now and I’ve been waiting for her to have a breakout series that will take her to the next level of recognition. I believe that this series will be that step up for the talented artist. There are no weak spots in this issue. It’s a pure joy to look at this art and I hope that the rest of the comic book reading world will take notice.

The lettering was professional, not taking away from the art and enhancing the sound effects and dialogue at the appropriate moments.  Letterer Zakk Saam should be proud.

The coloring comes off as the weak link in this comic, not that the coloring is bad, but considering how well this book reads in every other regard the coloring was noticeable. Some of the backgrounds are too plain and there are desert scenes that really could have popped off the page if handled differently, but that is my personal opinion. In the hands of another colorist, this comic would shine even more.

I was really surprised by this comic. I didn’t go in expecting too much and walked away enjoying it immensely. I really want to see where this book is going and I’m giving it a very high recommendation.