The Cast of Spider-Man: Homecoming Goes to Local High School with New PSA

Spider-Man: Homecoming is the highest grossing comic book movie of 2017 and the stars of the film want to use their newfound success to tackle a real world issue. 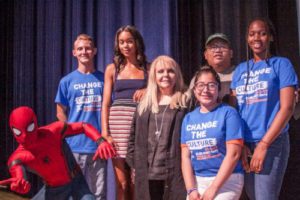 Teaming up with STOMP Out Bullying™, Laura and Jacob, along with cast mates Tom Holland (Peter Parker/Spider-Man) and Zendaya (Michelle/MJ), participated in a  PSA to engage students in the message of acceptance, inclusion and kindness. STOMP Out Bullying is a national nonprofit dedicated to reducing and preventing bullying, cyberbullying, sexting and other digital abuse while educating against homophobia, LGBTQ discrimination, racism and hatred, and deters violence in schools, online and in communities across the country.