If there is one thing that IDW Publishing know how to do, that is bringing life into old franchises. Clue is no exception! Paul Allor draws inspiration from both the game and the 1985 film, while still making it new. This five-part series, just like the game and movie, is a mystery. Somebody is killing off the guests at the mansion and it is up to the reader to figure it out. You do so by picking up on the clues that are spoken and unspoken.

Paul Allor and Nelson Daniel work together to tell this story. Sometimes what you have to pay attention to is what the characters are saying. Other times you have to notice what is missing, or added, to the panel. To add to the fun, there are not only variants of the covers, but also of the back pages. Three different 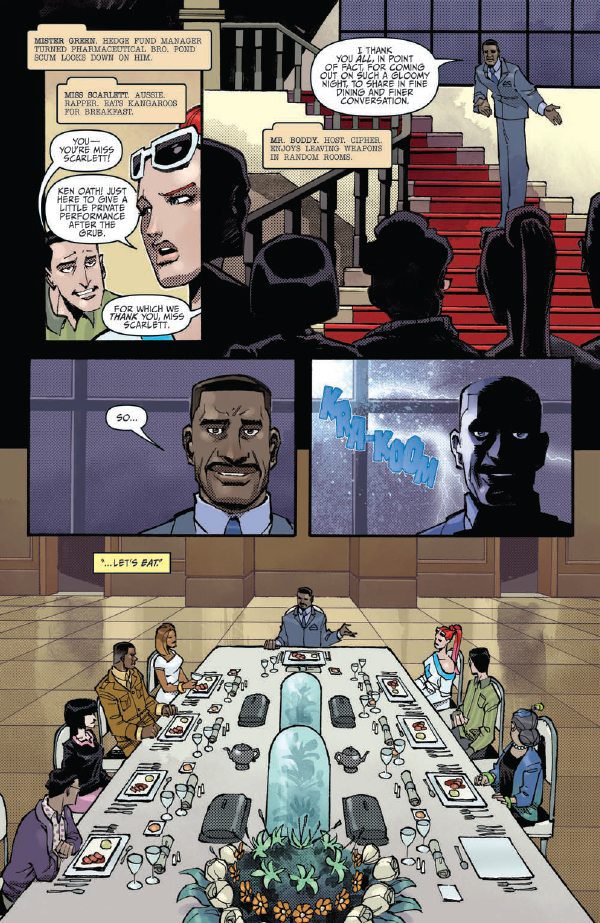 endings are out there. Find them all, because they contain clues that will help. Do not worry, you will have help in the series.

Not only do we get classic characters such as Miss Scarlet, Colonel Mustard, Mrs. Peacock, Professor Plum, we also have a couple detectives.  The murder of Mr. Boddy gets the attention of Det. Amarillo and Ochre. They have a great dynamic and really feel at place with these other colorful characters. (Colorful… get it?!)

While I have my suspicions on who the killer is, I am keeping my mind and eyes open. I have a feeling that there will be several twists and turns in upcoming issues.  For now, my favorite characters are Mr. Green and Dr. Orchid. I am not saying either is a killer, but we will see.

Maybe is was River, in the comic review, with the coffee cup?