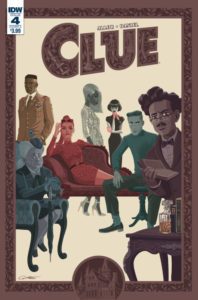 I did not realize how many of the comics and story arcs that I have been reviewing are coming to an end. We only have one more issue of Clue after this one. The bad news is, no more Clue, the good news is, we finally learn who the killer is! I am still making lists of possibilities in my head. That is what I am going to do with this review.

If you want to know about the issue, it was awesome. The art still knocks me out every issue, and the story keeps me guessing. It is more than a who-don-it, it is also a story of who you can trust and government secrets. So many strings to keep together in my head. Now I am going into full speculation mode. If you do not care for that kind of talk, come back next month when I will discuss the finale.

First off, I do not think that the butler (Upton) or Mr. Boddy did it. It is just too obvious of a choice and would almost ruin the story for me if that ends up being the case. Of course, if Upton did it to keep his boss’s secrets safe, I can forgive that. On that same thought train, I do not think that it is Miss Scarlett. This theory you might have to put your mind into a pretzel to follow, I apologize for that. I feel that the writer is trying to make us really think that she did not do it, but they think that we will in turn think it is her because of how hard they push. So I am going against that possible grain and thinking she did not. Follow me? Good.

Now to knock some of the ones they are pushing to us as killers: Mr. Green, Dr. Orchid, Col. Mustard, and Sen. White. Wait… looks like Mustard and White might be off the list, assuming nobody can prove me otherwise. Mr. Green is too much of a narcissist to have done any killing. I honestly do not think he has a clue about anything going on. Dr. Orchid, on the other hard, seems to know a little about everything, so let us keep her to the side.

This leaves Prof. Plumb and Det. Amarillo. I would hate to see Plumb go down for this, but it would be the most shocking. I trust his mustache too much to throw him under the bus, though. So what about the good detective? On one hand it seems a bit obvious to have the good guy turn bad, but it could be written right. She can join Dr. Orchid on my short list.

In conclusion, I believe it is either Amarillo or Orchid. If I were a betting man, I would place my money on the good doctor. She knows the most about what is going on and might have to most to gain from the murders. We will find out in issue five next month. Do you have any thoughts about who the killer is? Do you think any of my theories hold water? Comment on here or hit me up on Twitter and we will chat!