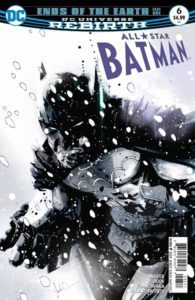 All-Star Batman has wrapped up its first arc. It was one we here at GWW really enjoyed. Re-teaming with a familiar artist in Jock for his all-new arc, Scott Snyder is back to work with a new setting, this one decidedly more frigid, and a new villain — Mr. Freeze. In the spirit of full disclosure, Victor Fries is my favorite Batman villain. His story of a criminal doing what he does to save his lover really resonates with me (note that I didn’t say it relates to me), so when I read that Snyder’s next arc would star the cold-blooded assailant, I was excited. With such a disclaimer in mind, it might come as a slight surprise to find I didn’t fully love this introductory issue, though it has several lovable components within it.

For starters, the new artwork is nothing short of phenomenal. An icy blue frost overtakes every page and makes the rare use of other colors stand out greatly. Jock’s illustrations are adult, his depiction of Freeze is classic but with a borderline horrific aesthetic to it, familiar to anyone who was around for Wytches. Freeze’s minions, essentially ice zombies, would feel at home in Game of Thrones. The wind whips unforgivingly on every page and you can see, even as he has prepared for the climate, Batman is giving everything he has to keep sane in the maddening cold. 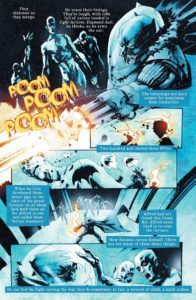 This issue is focused on Freeze more than the hero, even though they probably share an equal number of pages. It feels like we are all here to meet the man in the pink spectacles. Its pacing indicates a sort of grand introduction to the famous villain, and like the previous arc, it seems to pick up in the middle of the full story. Batman’s use of fire to offset the mad scientist looks great on the page and the narration and writing reads like Snyder’s other ongoing work, A.D. After Death. It’s more like a novel or even a poem at times.

That’s what worked, and that’s plenty, but the central story told within this issue is one that was somewhat lost on me — and I didn’t feel like that was user error. Freeze’s monologuing and the images on the final third of the pages get confusing and deserve another look over. That’s usually a sign of an author and illustrator not yet on the same page, but that’s unlikely the case here as these two have plenty of history. For whatever reason, it just didn’t hit as hard as I expected, even after an excellent first half. I expect, with some time to thaw, the story here and the full arc, will be better appreciated. Even with some of what seemed to have been deliberately confusing moments, I sort of lost the plot more than the author intended.