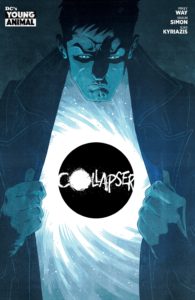 A dead alien on a remote planet begins an adventure that will ensnare an unlikely new hero.

Hospital orderly Liam James has received a mysterious package from his dead mother. Not knowing the woman at all, he tosses the box in his closet and goes about his day cleaning up after the elderly at a local 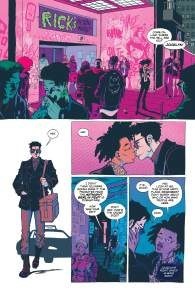 home. The whole time, the box begins to ooze a thick black liquid.

After a long day, Liam has a gig that night where he hopes to make it big as a DJ. When things don’t go as planned, he finds himself at home and connected to a strange force that will change his world forever.

Collapser is an interesting and entertaining concept. Mikey Way and Shaun Simon create an interesting narrative and characters that have the potential. Unfortunately, this first issue seemed to spend too much time focused on how clever Liam’s inner monologue is. I never got a sense of who he is and the other characters around him feel flat and uninteresting. Everything happening around Liam is interesting and if those things were focused on, it would make the story more engaging.

Have you seen this:
What Gambling Software Do New Zealanders Prefer?