I was going to record myself for this but you know I’d rather not wear make-up or day clothes on my days off, but I’m sure you can sense my incredible excitement and fan-girliness in text, right? Right? Yeah, I know you can.

So if you have watched all the episodes of the Twelfth Doctor, then you won’t have to worry, I will not be re-iterating any of the episodes here. Instead, I shall be nerding over the special features (which of my gosh there are so many) and the amazing box-set art (which is equally as amazing). Here I am, in my room, with my specially bought Blu-Ray player, and I gets to watch some special features, with my sonic screwdriver, and my lil’ Twelve Funko Pop in his rocking glory. 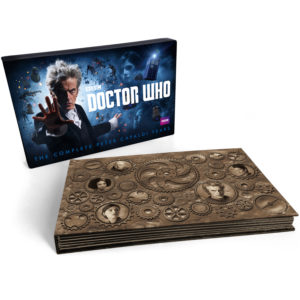 Let’s start with the box art, shall we? Every… sleeve?… has a promo picture from that specific season/ episode (episode in regards to the Christmas Special), and it makes you excited for watching that season. I mean, come on, when the seasons were first teased and we saw the promo pictures, how excited did that make you? For me? Very. The covers are decorated with matte gold, and plenty of cogs and gears, some as they are, with others filled with the Doctor, companions, and spotlight villains from the three seasons, like Missy, Davros, and the Ice Queen.

At the very beginning of the DVD book (terribly sorry, I’m not quite sure what to call it. It’s like a booklet, but thicker, and contains all the DVDs), is a picture I am very fond of, as I have seen it floating around Twitter before this set came out, as I happened to follow the person who set up the photo shoot. Do you know that rather famous photo series where it’s a horse in motion but each frame of motion was turned into an individual photograph? Well, it’s similar to that, but instead of a horse, we have the Twelfth Doctor in different poses, a picture you can definitely see in the promo pictures for this special DVD set.

Did I mention the holder box it comes in? No. Ah, well on the back, it displays a very special quote from the Doctor’s last season on his chalkboard: “I do what I do because it’s right! Because it’s decent! And above all it’s kind! It’s just that… just kind!” Words to live by, right?

*Hears grumbling* What’s that? Oh… you want to know about the special features…

For every DVD containing episodes, there is another DVD that contains special features. Me being the clueless person I am, I chose the last 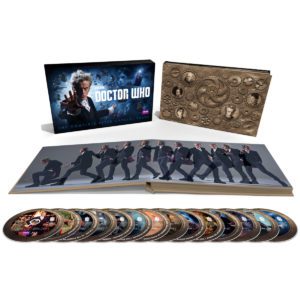 DVD thinking it contained all the special features. The only deleted scenes that are included are from Season 8, the Twelfth Doctor’s first season. Now, me personally, I never think deleted scenes end up being that special, and the same applies here, except for two scenes, one of which coming from “In the Forest of the Night,” but no spoilers from me here darlings, never ever, unless you say please.

Some of the special features include the San-Diego Comic Con Doctor Who panel from 2017, commentaries, Doctor Who: Earth Conquest, and some episodes of Doctor Who: The Fan Show, all, I assure you, are worth the watch.

After watching this amazing box set… I, well, I need to go and buy a Twelfth Doctor coat, and a plushie, and a shirt…. oh gosh, I miss him so much!!!!

*cries in fangirl for 5 minutes*

Okay I’m back. All in all, this set is totally worth the price. At first, I choked when I saw the nearly 150 dollar price tag, but that’s before I saw how packed with extra features this set is, and also after realizing how much just one season on DVD costs, so really, with this, you’re coming out ahead!