Constantine and Croissants In Hellblazer #7 Review 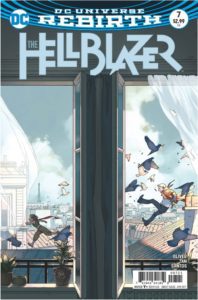 John and Mercury have just made their way to Paris to find a man that John once met who knows how to kill Djinn. Why? Glad you asked.
Previously on Hellblazer…

Abigail Arcane, Elemental Avatar of The Rot, has gone missing. Swamp Thing has come to Constantine for help finding her. John convinces Mercury to help Swamp Thing find Abby, which she only agrees to do for because of Swamp Thing, not John. Swamp Thing and Mercury make their way to The Rot, where she is able to travel to the other dimension, in an attempt to find Abby. There she finds Adnan a Djinn, who was sent to this other dimension by his brother, Marid. Marid has buddied up with Clarice Sackville, to addressed London’s Underworld, and offer humans the help of the Djinn to find paradise.

Soooo… Now that you are caught up, let’s jump in.

Issue #7 of Hellblazer is the first part of a new arc called The Smokeless Fire. As I mentioned, John and Mercury are in Paris to find a man, named Henry, who knows how to kill the Djinn.

Dante is helping his little sister with math homework, when there is a knock at the door. Some guys in a gang want some information about an apartment they’ve heard about. Dante gives them the info on the building, but they insist he come along, or he won’t get his share.

As John and Mercury are getting closer to Henry’s residence, Dante’s gang zoom past them on motorcycles, knocking Mercury down.  Mercury is okay, but senses that the motorcycle gang are going to the same place they are. (By the way, Mercury has some telepathic powers.) Although our heroes rush to the residence, the street thugs get there first. Dante is threatening to kill Henry, but Henry is old and feels that he is already on his deathbed. Before Henry passes away, he gives a token to Dante and tells him to place it on the scales. Dante does, and a secret door opens with a book in it.  Henry explains that this book is full of his memories and tells him to guard it with his life. This is the point where Constantine bursts onto the scene.  Dante is spooked and fires shots at John, then escapes out a window. John follows him onto the roof, and after a bit of a tussle, John is kicked to the ground. Dante gets away with the book. 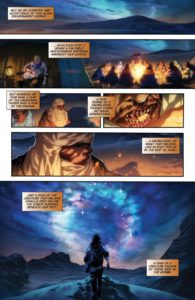 Book-ending and peppered in between the main story, there is a narration of another man’s journey deep into the desert in search of the Djinn. It’s not revealed who this man could be or when this is taking place, but I’m sure we’ll get answers to that later on.

I’m interested to see what comes of this story of the Djinn. Are they behind Abby’s disappearance? What exactly is Marid up to? Can Adnan actually be trusted?  These are questions I’ve had for a while now.  This issue didn’t really go anywhere and it could have been told in just a few panels. We’ll see what happens next… maybe this thug kid who takes care of his siblings is a more important character.

The art by Tan is strange. I’d find myself looking at one panel and deciding I wasn’t a fan, then I’d move on to a panel that I would think was beautiful. He definitely has a very distinct style. And even though I didn’t like some of it, it wasn’t a dealbreaker.

All of that being said, it didn’t seem like a whole lot happened in this issue. It did set up a lot of things for the remainder of the arc, which I will be keeping up with. Unless you are a huge Hellblazer fan, this is not a must read.