Back at NYCC in October, ‘Stargirl’ showrunner Geoff Johns hinted at JSA members and legacy characters appearing in the show, with Wally being specifically name dropped (along with Hourman and Wildcat, who have both been cast in the show). In a now deleted tweet from January 2018, Walker said “One day I will play Wally West.” Then in October, he responded to that same tweet saying “A kid can dream.” You can check them both out below. If Walker deleted this tweet around the same time ‘Stargirl’ was casting and Johns was talking about the character in the show, it seems likely this was more than just a coincidence. 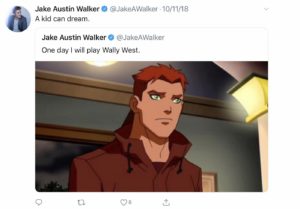 A kid can dream. https://t.co/hnZKd6ti6u

Wally West, who was introduced as Kid Flash and later became the main Flash, first appeared in 1959 created by John Broome. Since then, he’s gone on to carry his own solo title for twenty years and become one of the most beloved characters in DC Comics history.

‘Stargirl’ hails from Geoff Johns and stars Brec Basinger, Joel McHale, and Lou Ferrigno Jr. It will debut on DC Universe in August of this year.

Do you think Walker could be playing Wally West? Let us know in the comments!