I have always been turned off by games like Stardew Valley and Harvest Moon, crafting recipes and looking for materials has never caught my attention. Crashlands came along and changed all of that. In Crashlands you play as Flux, a purple “alien” who is stranded in a planet after an evil floating head takes his ship down. As nonsensical as this sounds it makes sense for the story Crashlands is trying to tell, the story, though dark sometimes, is a well written quirky funny story, the story is a second thought when it comes to crashlands. The gameplay loop for crashland is pretty simple, get materials, craft something and either turn it into someone or keep it. I really thought this formula would get old but the recipes that you get to build either new weap 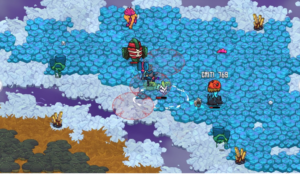 The game opens up the map and it allows you to explore at your own pace. My biggest complaint with the game comes with the map design, every part of the map looks very similar making it hard to differentiate one area from the last.

What I love the most about this game is how it became kinda therapeutic for me. I would come back from a long day at work and I would want to unwind. I didn’t turn on Red Dead Redemption 2 or Assassin’s Creed Odyssey on, no I turned Crashlands. In Crashlands I wanted to build my base, I wanted to build that new sword with better stats, I wanted to build that chest plate that made me look cooler, crashlands allowed me to do all of this and didn’t require a lot of thinking. Another thing I love about this game is how it introduces new mechanics without them becoming too overwhelming. I 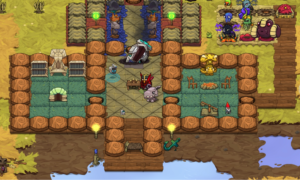 was roaming around the world killing one of the enemies and out of nowhere, that particular enemy drops an egg. The Jukebox, your companion, tells you can hatch that egg and that you need to build an incubator but that it’ll be worth it if you do so. I decided to build the incubator and the egg hatched. Before I knew it I have a pokemonesque companion that would help me take down enemies, I love it. And that is just one of the ways Crashlands introduces new mechanics. This game also became therapeutic to me due to the excellent music this game provides. For a game that for the most time you are going to be running errands and crafting new equipment, music is very important and I’m happy to announce Crashlands delivers.

At the end of the day, Crashlands is a “survivor” action game and I emphasize the word survivor because Crashlands does not bother you with limited space in inventory, it doesn’t bother you with harsh situations, or limited food, but Crashlands wants you to have fun and do whatever you want. Crashlands is more worried about you having fun than being a real survivor simulator and that is refreshing to see. With holidays right around the corner and the Nintendo Switch being a hot item I highly recommend Crashlands for just about anyone. Heck, there is even a multiplayer mode where the second player takes control of Juicebox and can help you out. Crashland’s is a must play game for anyone that gets a Nintendo Switch this holiday season.

crashlands
Add your voice!Join the conversation on Discord...
Join Our Discord