I originally thought this film was essentially going to be an ‘Asian Cinderella’, and I thought, “oh boy, an Asian version of a fairytale.” Don’t get me wrong, I was still excited about it. I’m a huge fan of Constance Wu and Awkwafina, both icons and pioneers of the Asian representation that Hollywood desperately needed. But overall, I didn’t have high expectations going into this movie.

I was so, so wrong. It made me laugh, it made me cry. It made me think, it made me cry. It brought me pride, it made me cry. Get the point yet? Honestly, it was a film that was packaged up to be a giant fist to punch me in the gut because it hit so close to home. And it hits home to me because I am a Vietnamese-American woman. I hail from two countries, none of which I feel like at times, I truly belong. I’m also not the only Asian-American to feel this way either, and I think that’s why so many people could relate to it. It was a film describing the struggles and triumphs that Asian-Americans regularly go through; given without the crazy rich boyfriend, but it is still important nonetheless. The film definitely showcased the product of hard-working Asian immigrants: to have children that grow up to be successful, strong individuals that can withstand the struggles that they themselves went through- and that is a strong element in the film. 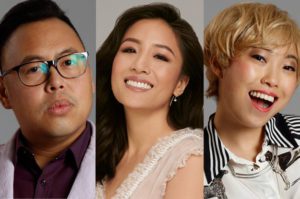 Aesthetic: The settings, colors, music, was glamorous. The film has a feel of traditional Chinese culture mixed with classic Hollywood glam. Popular songs of the classic Hollywood era were used in the film, but with primarily Chinese singers. The colors were elegant, bright, beautiful, and did its job of alluring the audience.

The story: Has good flow and wasn’t predictable as I initially thought. There were inserts to make the film incredibly relatable, like the scary mother of the boyfriend and the struggles that Rachel had in connecting with her culture. The film created a beautiful story, and a powerful message to tell everyone: that an Asian film with an Asian story can break barriers.