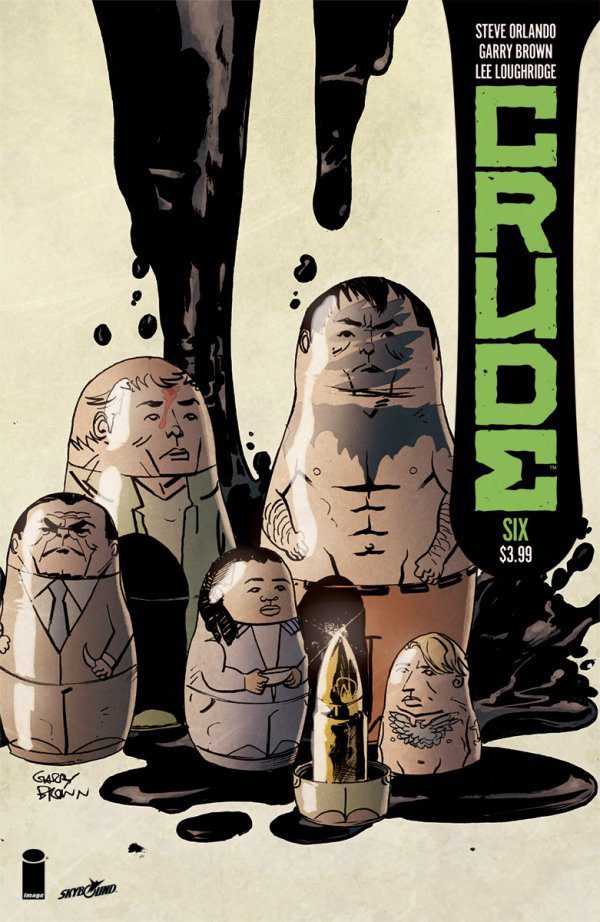 Crude #6 brings the story to an end and it’s been quite a thrilling ride. Piotr battles through his final fight here in Blackstone and the issue delivers probably the best fight in the entire run. Piotr comes face to face with the man in charge of Blackstone. Ivan is a man who loves power and control. He explains how loves running Blackstone tricking its workers with promise so he can work them to death and collect his profits. Piotr has gone through all kinds of hell at this point and you can bet he’s not letting anyone get in his way so he can finally get his revenge for the death of his son. What’s great here though is it all ends with Piotr really feeling like he understands his son and has finally found some peace in his mind. With everything that has happened now, all that’s left is for Piotr to go home and hope that everyone else at Blackstone can do what they can to finally make it a place they thought it was going to be when they first got there.

Even though a majority of the issue is focusing on the fight between Piotr and Ivan, the conversation that’s exchanged between the two from right before they fight to the end of it is one of the best exchanges in the issue. It brings up about how you can still love your kids even if you don’t agree with a certain lifestyle they choose to live. I do wish the paneling could’ve been a bit more creative during certain sequences in the fight and the art, for the most part, is what you expect from the rest of the series. I have to say too that the final page is by far one of the best pages in the entire run. It’s very simple but it just feels great when you see it.

Crude is definitely one of the surprise books this year for me. The main drive of Piotr was his anger and even though he never really had a strong relationship with his son prior to his death, he still shows that he’ll always love his son. Even though there were a couple of times that it may seem the series would need more than 6 issues, it all wraps up very nicely and Piotr’s story really feels like a fitting ending.