Cybermen Are Going Back to Their Roots!

Ladies and Gentlemen of the Who-Universe, an old face of a familiar favorite is returning to stand-off against the Twelfth incarnation of the Doctor. That’s right, the original Mondasian Cybermen are returning to the screen! On Instagram, the bbcdoctorwho and doctorwho_bbca accounts shared pictures of the creepy Cybermen surrounding a very surprised Peter Capaldi, in what can only be a promotional shot for this upcoming two-parter in Season 10 (or Series 10 for our English bretheren). Here’s what was written underneath the promotional shot on the bbcdoctorwho Instagram account:

“Guess who’s back! It’s the original Mondasian Cybermen, returning for episodes 11 and 12 of the new series, alongside Peter Capaldi as the Doctor, Pearl Mackie as Bill Potts, Matt Lucas as Nardole and Michelle Gomez as Missy! The episodes, written by Steven Moffat and directed by Rachel Talalay, are now filming in Cardiff.”

Missy? Could this possibly be connected to her last escapades with the Iron Man-esque Cybermen? Perhaps….

Have you seen this:
Willem DaFoe spotted on set for untitiled Spider-Man 3 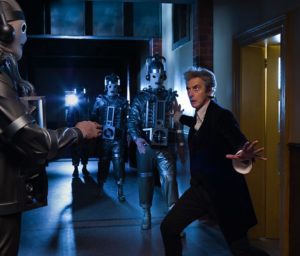 It is known that Peter Capaldi is quite the fan of the Mondasian Cybermen, and it is quite the send off to give this huge Doctor Who fan a finale two parter with one of his favorite foes.

I always favored this version - the original version - of the Cybermen, as they had human hands. HUMAN HANDS!!!

I digress, it is amazing to see an old face of a perennial favorite return to the show. But my gosh, I would love to know how Peter reacted when he found out he’d be squaring off against them. Can you imagine the grin?

Seeing as the Cybermen have now turned into silver versions of the snarky Marvel character, Iron Man, it is a relief that we will now see them back at their roots, when they were first becoming robotic, and when they were truly frightening to behold. It’s been roughly fifty years since William Hartnell’s episode “The Tenth Planet” aired, and now, Mondasian Cybermen are returning, and I wonder what adventure they will bring.