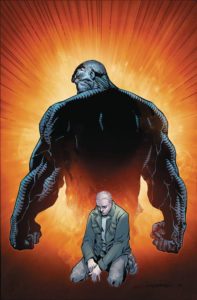 Over the past few months, DC has quietly canceled the majority of the books within the “New Age of Heroes” line and Damage is the most recent title to end. Damage joins Sideways which ended in February and The Curse of Brimstone ended in March.  The Silencer wraps up in June. Now if any of those characters or titles do not sound familiar, it may be easy to understand how DC decided to cancel the vast majority of a line, leaving only The Terrifics standing. Thankful Damage #16 provides an inflection point for the character and keeps the door open for future adventures.

Damage was a weapon created by the US government to insert into combat zones too dangerous for troops. Solider Ethan Avery volunteered to become something more and for only an hour each day can transform into a massive, unstoppable monster. The series started with Damage escaping and readers saw him hunted by the government. Along the way, Damage got a tour of the DC Universe with run-ins with Swamp Thing, Wonder Woman, Superman, and eventually the Justice League. This final arc has Damage banished to a monster island.

The conflict on the island is present, but the real conflict of the issue and arc is Avery’s internal fight. The plot regarding the villain and the beasts of the island is serial pulp, but the dialogue between Avery and Congo Bill regarding directing and using the monster within makes for a satisfying story of self-discovery.

Venditti and Ryan’s artwork help to create a comic strip serial vibe. The art style works well for the Kong Island / Lost World atmosphere of Monster Island. The majority of the action is conveyed well, but there are moments in the climactic confrontation where the scale of monsters and characters feels slightly off.

Damage#16 is a suitable sendoff providing some character growth and an unknown future. Damage‘s pitch might have initially sounded like DC’s Hulk, but over the course of sixteen issues, he evolved into something that could be unique in the DC universe. Like a good movie monster, Damage’s story is only over until the next time he returns.

damage DC comics
Add your voice!Join the conversation on Discord...
Join Our Discord