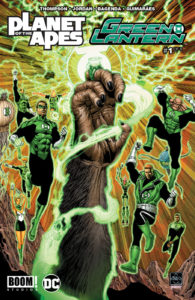 On a distant planet, Lanterns from across the spectrum are gathered in chains and are being drained of their powers. The resulting energy streaks across the sky and impacts onto another planet. It is discovered by Nova and the Ape scientist Cornelius as they are searching for displaced astronaut Taylor among the wasteland. As Cornelius stumbles upon what he thinks is another relic from ancient man. As he ascends from the pit, he finds that Nova is gone and he is alone. He returns with the ring to his fiancé Zira and the two of them wonder what to do with it. 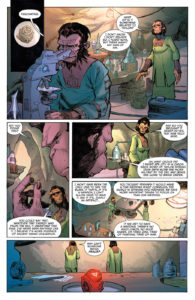 At the same time, across galaxies and dimensions of time, Hal Jordan and the Green Lantern Corps are facing off against a team of Red Lanterns as the creator of the Universal Ring begins his search for it. A search that draws Jordan back to Earth and a confrontation that tears at the fabric of reality itself.

This is an ambitious story from Robbie Thompson and Justin Jordan. It has the potential to go in many different directions and they manage to set the stage well. It would have been interesting to see more of the world of the Planet of the Apes presented in order to give context to the importance of Cornelius finding the ring. There were moments in the conversation with Zira where they discussed the chaos in their society that would have been more effective and evocative if it had been shown. Barnaby Bagenda’s art is well done, but the colors are a little flat and nothing in the action seems particularly dynamic.