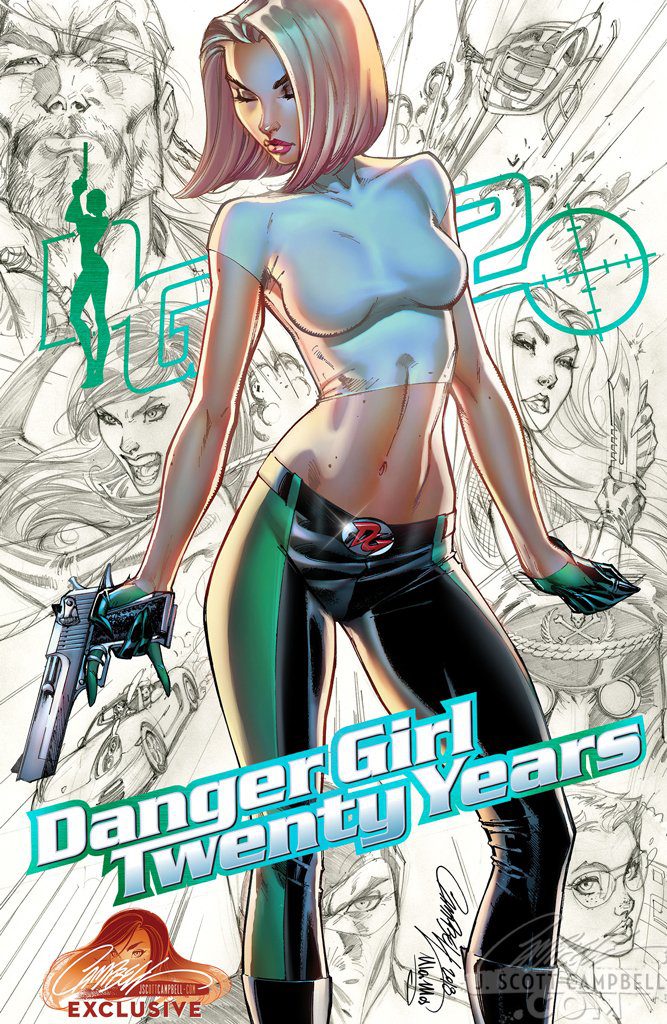 Danger Girl Twenty Years is an 88-page collection of the preview issue and giant size issue 1 of the debut of Danger Girl which was created and brought to use by J. Scott Campbell twenty years ago. Along with those issues in this collection, we’re also treated the pencil work for both issues.   myself am a new fan of Danger Girl only to have read the most recent run Danger Girl: Renegade, which was just a short 4 issue run but was a most enjoyable and fun action/adventure comic. This anniversary collection gives us some absolutely wonderful scans from Campbell’s own collection and I have to say it’s very impressive that he still had these laying around somewhere after 20 years. These days it’s not so uncommon for us to get scans of sketches, penciled, and inked comics as a nice bit of extra in our books. But getting full issues of straight pencil work for a comic this old is quite something to see.

If any of these were damaged in any way due to unforeseen accidents, then they would never have seen the light of day. It’s also very enjoyable to compare the penciled work to the final version of the released issues that are collected in this book too.  If you were also someone that has never read the series but have been interested, I would say this would be a great pickup to start on. Not only you get to see how the story starts, but you’re also getting something nice to add to your collection to see some of the processes on how a comic looks from before having all its finishing touches. I think the only other part that would’ve been nice to see is how the issues looked inked before the coloring, just to add on to showcase the process of a comic from its initial sketch to final product.

J. Scott Campbell is one of the industries most renowned artists and any fan of his work will want to pick up this anniversary collection, even if you haven’t read the series before.  Danger Girl from what I’ve gathered is all about having fun, being sexy, and kicking butt and to see full-blown issues stripped away of its colors really can show how much work goes into just one issue. Cheers to 20 years of Danger Girl.