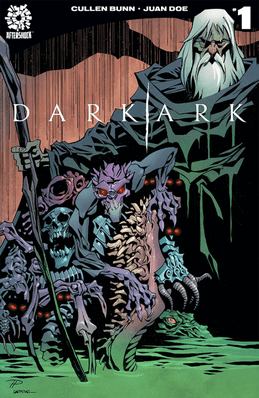 Hitting comic book stores on September 20th will be a very cool and incredibly interesting new series from AfterShock Comics called Dark Ark. It combines all of the elements of myth, lore, and alternate history into a deliciously dark tale set during the Biblical time of The Great Flood. Written by the always exceptional Cullen Bunn and smoothly drawn by Juan Doe, Dark Ark presents us with the idea that Noah may not have been the only one to build an ark to ride out the 40 days and 40 nights deluge of the Earth.

In this tale, a dark wizard by the name of Shrae takes two each of the demons & dark creatures (I.E. vampires, manticores, harpies, etc) aboard his own ark to survive the flood. But when a gathering of these monsters inhabits such a small space for so long, trouble is bound to happen. This is a fascinating look at a plot that runs tangent to a story with which we are all familiar. The scenes set by Bunn’s narrative and Doe’s accompanying art make for a compelling read that will make you hunger for the second issue as soon as you’ve finished the first! Comics like this are the reason independent publishers like AfterShock should be celebrated.

Dark Ark is due out on September 20th so hurry and let your local comic book store know that you want them to put it on your pull list! You may even want to get 2 copies to make sure you get the alternate cover drawn by the phenomenal Phil Hester.