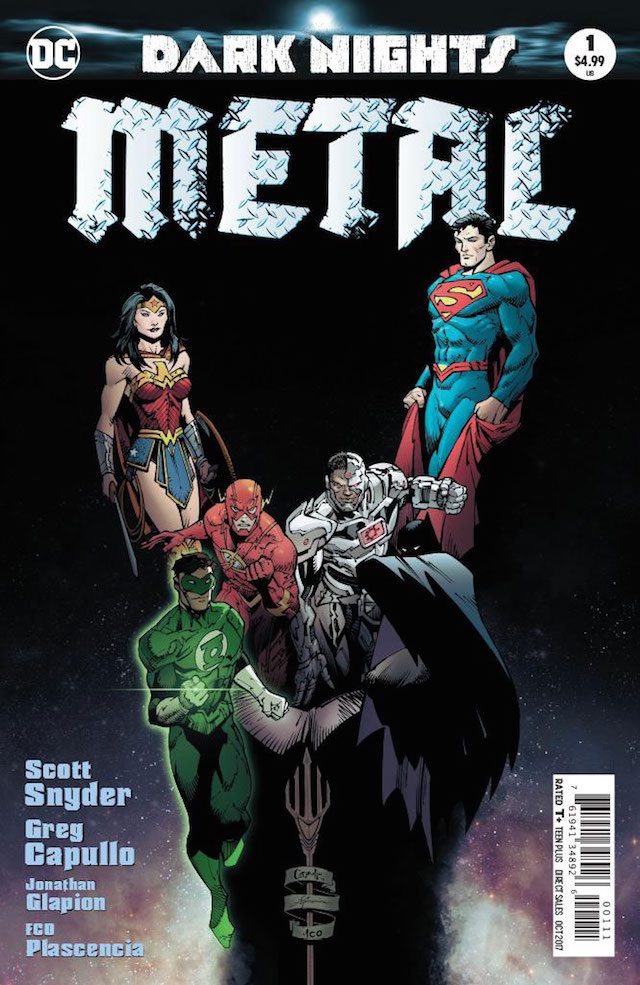 Often times, to my chagrin, I find myself starting a new comic book event series and almost immediately finding not only parallels with previous stories but also comparing them to other arcs from other publishers as well as previous events with the same characters. It’s not a difficult thing to do when every few years you get another “Secret” something or another “Crisis” of or on something else. You pick them up and you read them because they feature your favorite characters performing heroic acts (mostly), but there is always the specter of something ominous because of the name. Metal is different. It sparks my curiosity because it is unknown. It doesn’t betray the mystery of the story and it leaves open the possibility that anything can happen and does.

The first issue of Metal opens with mystery and action. It starts and doesn’t stop until the end. The Justice League is trapped on War World and their powers are being dampened by the armor they are wearing. As Mongol rallies the crowd watching the heroes fight for their lives, the League sees that the despot has enslaved Toyman to create giant robots to fight the heroes. As the powerless heroes dive into battle, Batman notices something strange about the robots and enlists the league to follow his lead. As amazing as the battle is, it isn’t even the beginning of the mystery surrounding this story.

As the League returns to Earth, Alfred informs Bruce that a mountain has formed in the middle of Gotham. The League is on the scene and they begin investigating what it is and where it comes from. When they find human beings in cryogenic storage and ominous messages on the walls, they are confronted by Lady Blackhawk and her organization. When she finally reveals who she is, it’s jarring because she is a character rooted in the history of the Justice League as well as the DC universe. She informs them that a full-scale invasion is on the way and they follow her to Blackhawk Island. As she informs them of the mission of both Carter Hall and the adventurers who went before him, she also reveals that the catalyst for the invasion is Batman.

Bruce escapes from the island in one of the best panels I have seen in a comic in a long time and the mystery gets even deeper as a hidden journal is discovered with links to the Dark Knight, psychics, and mystics around the world begin to have strange reactions to a hidden force and another mysterious figure reveals himself to Bruce with an ominous message. 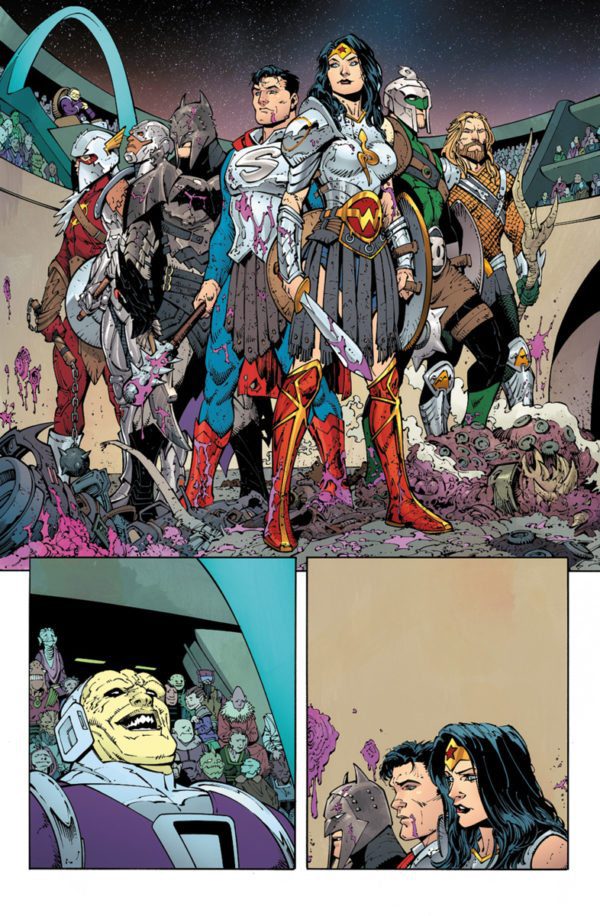 The reveals, pacing, and plotting of this story are amazing. It is a full on love letter to the DC universe. As dark as the tone is, there is a celebratory feeling in the book not only with the verbal call backs to events in the past but also in the visuals including the pictures on the walls of many of the scenes. Snyder has crafted a great mystery with this issue and every member of the League is given some great moments that showcase how well they work together. Even with that, he has been able to isolate Bruce from the group with a motive that makes sense for the character without openly alienating anyone.

Greg Capullo’s art is astonishing. I have been a fan for a long time, but he seems to be having a lot of fun with this larger group of characters that he has been allowed to play with. All of the characters are dynamic, the action is visceral and the composition of panels flows amazingly. The colors in this issue are amazing as well. Even in the moments that seem to be the darkest, there is a great contrast with the colors of the characters. I can’t wait to see where this story goes, how much of the DC universe gets incorporated into it and how deeply it affects the characters going forward.