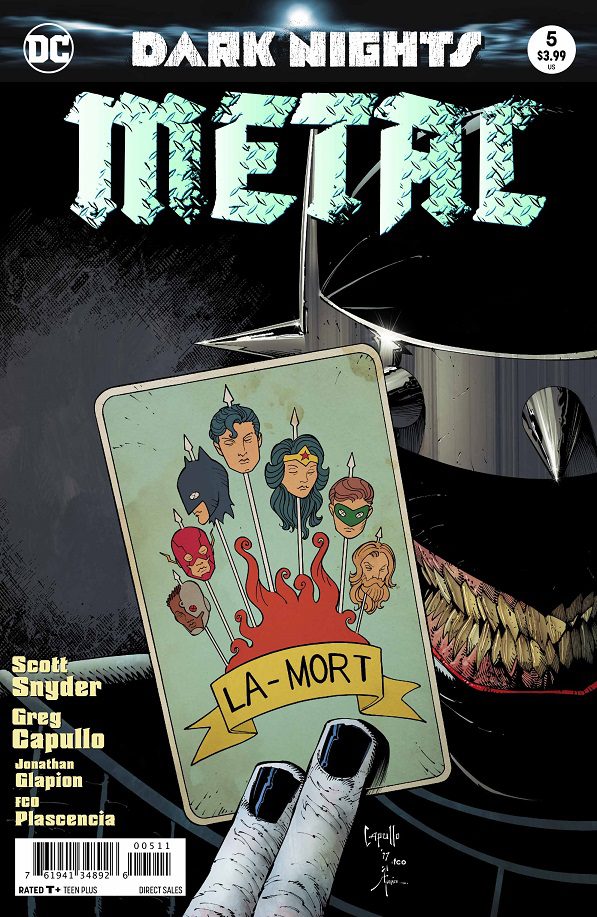 The darkness continues to spread as The Batman who Laughs implores his master to call for the armies of the dark multiverse and the creature Barbatos begins. At the Forge of Worlds, Batman and Superman try to reason with the mutated Carter Hall, trying desperately to find the man’s humanity in the creature that he’s become. As both of them fight the former hero and the nightmarish creatures he is creating, Bruce tells Clark that he refuses to let Barbatos take his hope from him again and that he knows there has to be a way to reignite the forge.

The heroes continue their quests with Aquaman and Deathstroke making their way to the center of the Earth only to discover that they are not alone. Mr. Terrific and Hal Jordan find an unexpected ally among the Thanagarians and they manage to escape from their prison only to find themselves in a worse situation. Wonder Woman continues to fight back against Black Adam and Kendra and in the midst of their battle, she discovers the object she seeks. But is it the salvation that they are hoping for or another tool to be used against them to bring on the dark?

At the Forge, Batman makes one last ploy to appeal to Carter Hall. A ploy that might give he and Superman the advantage they need as Wonder Woman confronts Kendra with a weapon 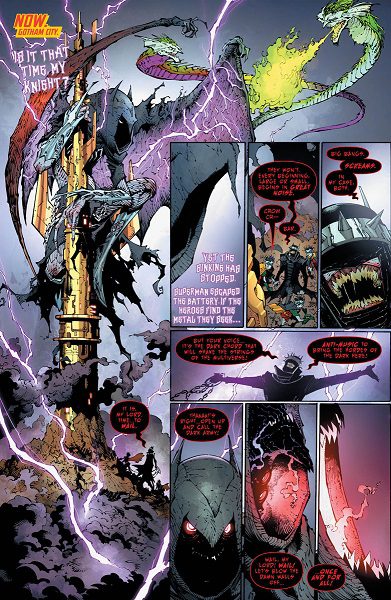 designed to bring her back from the darkness and the two of them proceed to fight for the fate of the world.

The best parts of this issue are the ones that reinforce the true character of these heroes. Batman’s determination in the face of overwhelming odds, Wonder Woman’s inability to give up and Hal’s focus are all seen in this issue and it is great to see these heroes soldier on despite the odds. There are also some great returns in this issue that I won’t spoil, but they represent some of the best DC heroes and the worst DC villains. It’s always fun, especially in this series, to see Scott Snyder successfully play with all the toys in the DC Comics toy box. It’s even better seeing those characters have both purpose and purchase in the story itself.

Greg Capullo’s art in this issue is dynamic and beautiful to see. There are some amazing panels that look like the best heavy metal album cover you’ll ever see in your life. The detail is amazing and he has done an amazing job of pacing the art to the story. Many of the panels seem to have an energy and movement all their own and there are so many great moments that catch the eye that I found myself reading this issue multiple times. The conclusion of Metal can only be glorious if this issue is its lead-in.