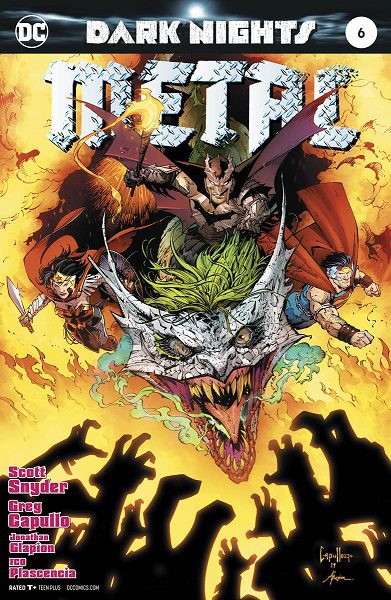 The saying that “it’s always darkest before the dawn” was never more prescient that in this story and in its giant conclusion that finds Earth sinking into the Dark Multiverse with Barbatos calling for his minions to destroy the remaining heroes.

The story begins with The Batman who Laughs unwrapping the prisoner he has been torturing for his own amusement and show him the world. The reveal of who the prisoner is had me sit bolt upright. It’s that good. He shows him the heroes falling and being taken prisoner, but also shows a resilient and determined Wonder Woman fighting back, giving everything she has to defend the world and free her friends. She and a newly freed Kendra fight their way up Challenger’s mountain as the hordes of the Dark Army continue to advance. Wonder Woman decides to use the metal of her bracelets and the Nth metal mace she’s carrying to send a final signal to the League.

As the heroes fight to escape, Mr. Terrific has to turn to their secret weapon to try and turn the tide of the battle. He calls on help from Plastic Man. The gambit gives Diana enough time to find her way to the heart of the portal itself and down into the darkness to find her friends. As she and Kendra confront the keeper of the Forge, Barbatos attacks. Unfortunately, his attack blinds him to another attack coming from a place he never expected.

There is so much more I want to say about this book, but if I say any more, it will spoil every exciting moment still to come from the narrative. What I will tell you is that there are so many amazing moments in this story that it absolutely needed to the additional pages to tell it. This is an epic conclusion to a story that has brought the heroes of the DC universe to the depths of their understanding and affirmed their belief in their mission and each other. For all of the dark tones that have been on display throughout this story, it has always been a story of finding hope amidst the darkness. A lesson you see in Batman and how he reacts to the situation around him. You see it in Superman as he tries to remind Bruce of who he is and why he fights. You also see it in Diana in her unerring drive to fight for those she loves.

One of the best features of this issue is how it deftly calls back to the first issue and moments throughout, especially in the journal of Carter Hall. It is a huge task for any writer to keep a narrative thread running throughout a story and Snyder has done it masterfully. There is an amazing symmetry to this story from start to finish and you really understand the importance of DC’s Trinity in the conclusion. As amazing as this story is, it is absolutely enhanced by the amazingly detailed art of Greg Capullo. I could study his panels for days and find more and more details that I never saw before. It is a beautiful spectacle to behold.

Dark Nights Metal is an amazing achievement both in storytelling and art. There is so much to love in both and each compliment the other with a comforting flow that draws you in as a reader and the beats at the end set us up for some awesome new stories to come. They went big on this one. They left it all out on the field and it was worth it.