The highly popular video game series Dark Souls from Bandai Namco allows players to explore a lush, unforgiving medieval landscape with new, and sometimes terrifying, creatures that inhabit it. The player takes on dangers using might and magic to combat foes that seek to destroy the world. Titan Comics has been expanding the world of Dark Souls in a series of comics designed to expand on the world of the game as well as tell new and exciting stories from the world of the game. 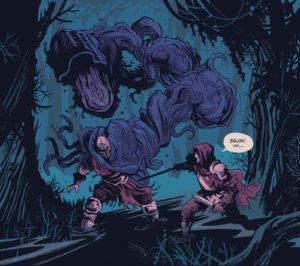 The critically acclaimed stories are back with a new series Dark Souls: Tales of Ember. Taking place after Winter’s Spite and Legends of the Flame, Tales of Ember includes new takes on the mythology of Dark Souls and immerses the reader in a series of new adventures guaranteed to enchant and amaze.

Titan Comics has brought in some top notch talent to bring these dark tales to life. Not only will the series see the return of George Mann (Doctor Who) and Alan Quah (Dark Souls: Winter’s Spite), it also features work from Tauriq Moosa (Dark Souls), Damien Worm (The October Faction), Michael Walsh (Hawkeye) and more!