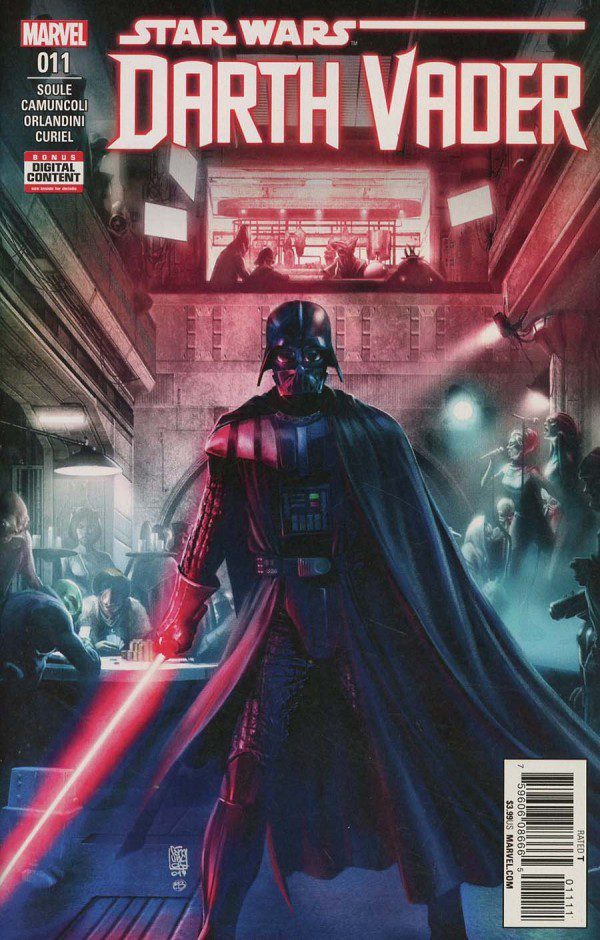 There is a freedom that comes with writing a character who has a well-known origin and death, but limited details and character development during life.  Darth Vader is one such character and writer Charles Soule continues to take advantage of that creative freedom. This series successfully interjects emotion into the character of Darth Vader through Soule’s dialogue and Giuseppe Camuncoli’s artwork.

After a strong tenth issue that tied nicely into the prequels, this issue finds Vader chasing down a lead on a Jedi sighting. The action keeps this issue moving forward, but Soule builds in opportunities for insightful dialog throughout. Pairing Vader with a force sensitive Inquisitor who can read emotion allows readers a window into the character of Darth Vader. Early in the issue, Soule uses this to hit at Vader’s mournful heart and how it may be causing him to throw himself into battles in the hope of dying and rejoining his loved ones. This mourning does not create a defeatist Vader, but instead only fuels his anger and thus his power in the dark side. Soule creates another break in the action where the emotion reading Inquisitor implies that Vader does not have to look far to find people betraying the Jedi. This results in a wonderful double meaning regarding Anakin’s own betrayal of the Jedi that Vader is too wrapped up in his own anger to catch the inferred meaning. Vader’s pragmatic use of the characters he was hunting down again allude to the complicated emotional character that Soule and Camuncoli are creating. Soule’s characterization of Vader hints at a greater emotional challenge to come when the final panels reveal a more complicated test for Vader than simply hunting down Jedi.

Camuncoli artwork creates a physical presence for Vader that directly connects to the characterization of Anakin Skywalker. Vader’s body language is up close and confrontational during discussions and his movements depict someone whose emotions control their actions. But Camuncoli’s art does suffer a little in the heat of battle as the panels try to communicate too much without words.

The combination of Camucoli’s pencils and Soule’s script create a world that any Star Wars fan will want to explore. This issue starts a new story line that looks to test Vader and readers will benefit from the emotional responses this create team will invoke.