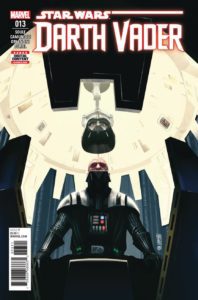 remains an exceptional exploration of a character and a journey through Star Wars lore. Charles Soule’s writing and story pacing paired with the artistic team of Camuncoli, Landini, and Curiel consistently delivered beautifully tragic stories around Vader’s acceptance of the dark side that casual fans and lore keepers could enjoy. The last issue capped off a 12 issue arc of Vader’s early days and ended with the Emperor decreeing Vader as his right hand. Issue #13 jumps ahead three years.  While at first, his jump felt like a missed opportunity, Soule crafts an engaging opening to this new chapter in Vader’s life.

The beginning of this issue mirrors the end of the last issue, with Vader in mediation. Issue #12 saw Vader’s psyche burning out the glimmers of love and light from Anakin Skywalker. Here, he is revisiting his battle on Mustafar with Obi-Wan, except now he is Lord Vader and in command of the dark side. The result plays out differently and immediately sets the emotional tone. Vader has convinced himself that the only way he could have defeated Obi-Wan was to become Vader. After skipping ahead three years, this short scene demonstrates the degree of commitment Vader has to his dark side path. 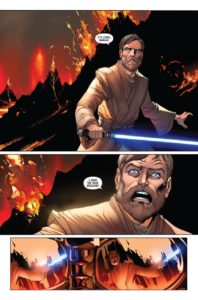 Soule and Camuncoli weave references and imagery of Star Wars lore throughout the entire book.  Governor Tarkin is involved in a dispute on Mon Cala which brings characters from the movies and cartoons into the story. The boy king Lee-Char from the Clone Wars series is drawn in a way that realistically shows his growth but makes it easy to visually connect him with the earlier cartoon. Raddus, from Rouge One, and Ackbar both make appearances as well. And in direct contrast to Marvel’s ongoing Star Wars title, Camuncoli captures Tarkin’s facial mannerisms wonderful without the odd photo realistic sheen present in Star Wars.

Both Star Wars #44 and Darth Vader #13 take place on Mon Cala and appear to connect together. Last week’s Star Wars referenced events that appear to be occurring in this arc. Fortunately for readers, Darth Vader does a lot more with their 22 pages as readers are treated to a number of plot threads that could play out over this arc and are teased with a robbed Jedi that understands that Vader is Anakin.

There is a lot to love in this issue and Soule and company retain their tight grasp on the evolving character of Vader. With references to the movies and cartoons, but without a dependence on lore knowledge, Darth Vader #13 is the perfect jumping on point. Star Wars fans that haven’t given this series a try are doing themselves a disservice.