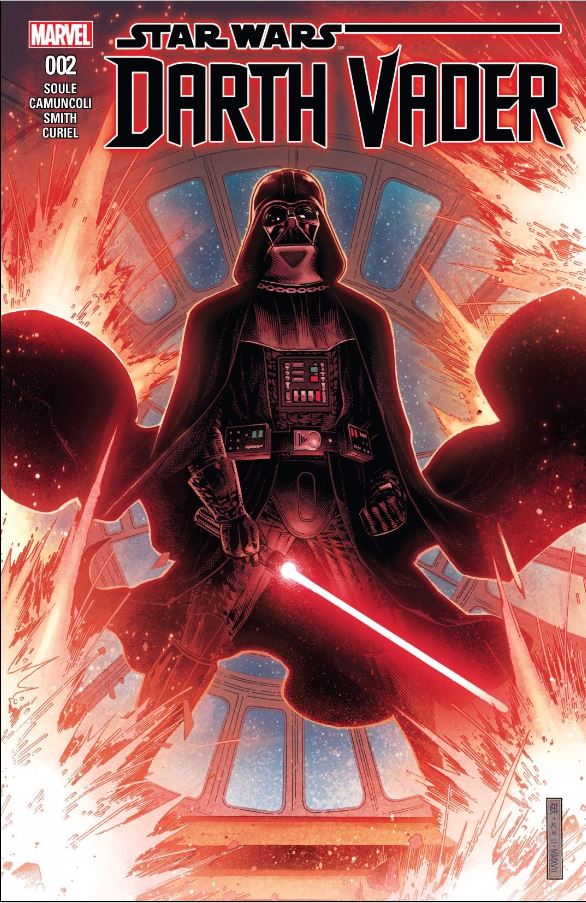 The 2017 Darth Vader comic series continued with issue 2. The credits have barely rolled on Episode III as the galaxy fell under the domain of the Empire.

When we last left the newly minted Lord Vader, he had been ordered to seek out a Kyber crystal by his Master, Darth Sidious. After his recent battle with Obi-Wan Kenobi the artist formerly known as Anakin was left missing arms, legs, and, of course, a lightsaber. He would need the crystal to construct a new one.

Kyber crystals, however, just became a rare commodity in the galaxy. Order 66 had been terrifyingly efficient in wiping out the Jedi. However, the new heavy-breathing Sith Lord must find a surviving Jedi and take his or her crystal.

This issue featured the FIRST battle for Darth Vader in his armor!

Vader is my favorite Star Wars character and I am glad the powers that be chose to explore this point in his journey. Unlike the established Vader of the 2015 series, here it felt like he is moving through Dark Side puberty. He just shed the trappings of his Jedi-hood, yet he is not fully Sith. The wounds are also still fresh from losing his secret wife, Padme.

And in this issue, he took out some of his frustrations on his fellow comrades in arms: the Clone Troopers. 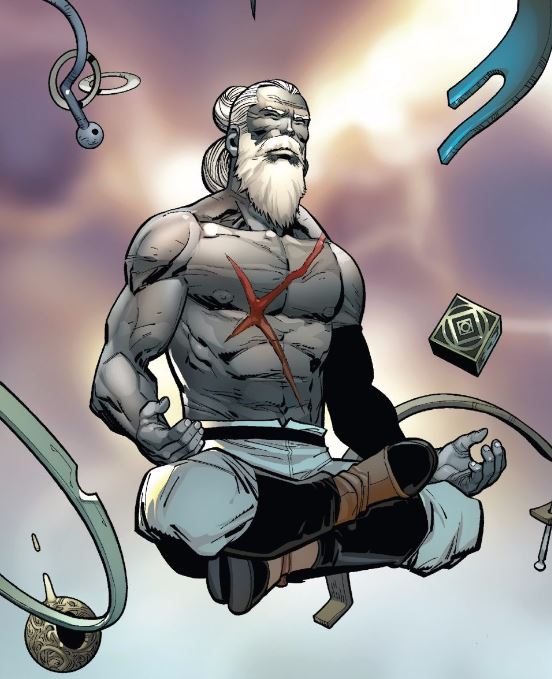 The issue began with Vader piloting his foreboding starship towards the Mid-Rim. There he arrived at a Jedi Outpost. The space station resembled a floating temple in the cosmos known as Brighthome.

There was an amusing opening with bored clone troopers playing in boredom with Jedi lightsabers. They were ordered to archive and inventory the Jedi’s belongings and deliver them to Coruscant. The clones find this to be tedious work as they played with the lightsabers like cosplayers at a convention.

I loved how the clones were drawn in a casual, almost mundane, manner. It reminded me of when we caught snippets of conversation between Stormtroopers in Ep IV on the Death Star. The clones also expressed concern that they would soon be rendered obsolete:

“I heard they shut down the facilities on Kamino. They’ll train up the last batch of clones and that’s it….I think our fighting days are done.”

In addition to exploring the adventures of Vader immediately after ROTS, this series is also shaping up to be a true sequel to the prequels. The background art on Brighthome provided excellent images of Jedi swag with a variety of robes on display, lightsabers, and holocrons.

Have you seen this:
Free Speech by Big Finish (Review)

I wondered who was in charge of the Jedi tailoring? Is this a position in the Order or do they subcontract it to droids or Temple workers like we saw in The Clone Wars TV series?

The clones also expressed an ambition to put on the red armor and serve as a guard to Palpatine himself. In the new Empire, this would be the highest honor a trooper could obtain. I suppose it would be the equivalent to serving in the Secret Service in America.

The clones soon realized their chance to prove themselves when an unidentified ship arrived on their scanners.

Vader approached Brighthome in his newly liberated starship. His droid kindly offered to transmit the proper clearance codes so he would not be seen as a hostile and could land without incident.

Vader opted to forgo the codes. 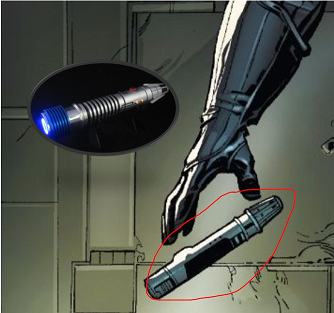 The iconic villain entered with explosive, and deadly, intent. He quickly proved that, even with his injuries, he was still the greatest starpilot in the galaxy. He easily eliminated the clone starfighters and moved to the hangar.

This marked the first canonical fight for Darth Vader in his armor.

Like many beta testings, the armor was not immediately user-friendly. It was clear that Vader was still getting used to his new body in the battle between the clone troopers in the hangar. He arrived with a glaring hole in one of his new robot legs.

Vader was also suffering from the lack of a lightsaber. Luckily, he happened to be fighting in a facility stocked with them. He took a green saber from the wall with a hilt that resembled one of the stock props used by many of the prequel Jedi. It resembled the hilt used by Mace Windu in Episode I, Eeth Koth, and Plo Koon.

It was strange to see Vader with a green saber. It was also unusual to see the unstoppable Sith Lord overwhelmed in a fight. It shouldn’t be a huge surprise. The clones were battle-hardened veterans. Vader was fresh off his Mustafar accident and still getting used to his robotic prosthetics.

With a saber in his metal hands, however, Vader became unstoppable. After the fight, he discarded the borrowed weapon of the Jedi. It would not suit his purposes. His orders were clear that he had to take a saber from a Jedi in combat to fulfill the requirement of his Sith trial.

As it turned out, finding a Jedi was the purpose of his visit. After a cathartic release of anger in slaughtering his former allies, Vader used his droid to access the archives of the facility. He requested a very specific search for a term new to fans of Jedi Lore:

“I require data on any Jedi who took the Barash Vow prior to the Purge.” 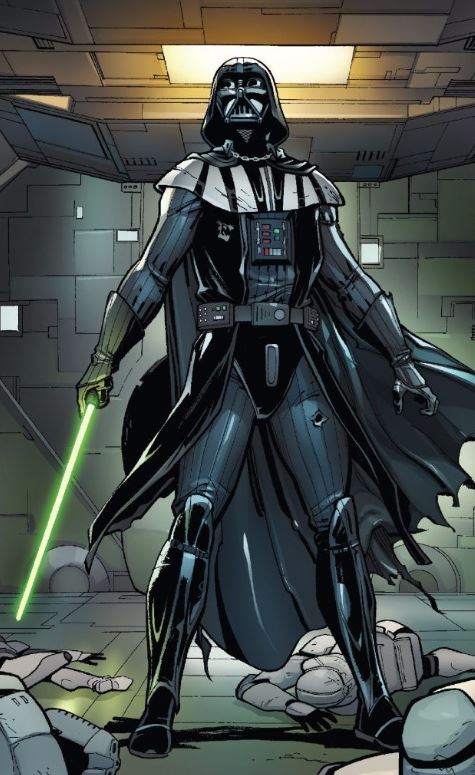 This sounded alien to me. Fortunately, Vader provided exposition. A Jedi pursuing a Barash vow had sworn to refrain from participating in the Order’s normal routines.

It was like a religious pilgrimage or long-term fasting. They seemed to me to be the most pious of the Jedi. They may still be alive because they would have been far removed from the events of politics, diplomacy, and most importantly war.

Vader plainly stated the Barash takers would have felt the Purge but their oaths would preclude them from taking action of any kind.

This would leave one of the Barash takers as a prime candidate for Vader to seek out for a duel. The Force (or plot) was with Vader. The droid located a suitable candidate with a name I’ll never be able to pronounce:
“He is unique, even for a Jedi. His name is Kirak Infil’A. It has been many years since he has been active in Jedi affairs…Apparently Master Infil’A had precisely one purpose within the Order…

Then we see a bit of art that felt like fan-service but it definitely got the message across. Master Infil’A was drawn like a Jedi version of the martial arts master, Pai-Mei. I was very curious where he received the long scar running across his chest. My first thought was that it was the result of a lightsaber duel. The illustrators did an excellent job teasing the eyes with visions of Star Wars past and questions for the future.

This issue was meant to depict Vader’s brash “newness” in his role in the armor and has the Sith Apprentice to Palpatine. In that manner, the artists somehow drew the iconic helmet in a way that made the villain appear younger and less experienced than in the Empire Era. This was accomplished with subtle angling of the helmet’s shroud to appear less V-shaped and thus not as masculine.

He’s not an Anakin, though not yet a Vader. But he’s well on his way.

We know he will survive the fight with Master Infil’A but the battle-hardened Jedi Master of the Barash will not be a pushover. The single panel that featured his meditating visage told that story excellently.

I am still loving this sequel to the prequels and can’t wait for more in the next issue.