DC Bombshells have definitely become a fan favorite design as they combine the nostalgic look of the World War II era with our favorite superheroes in an often beautiful and classic aesthetic. The Bombshells have slowly been making their mark on DC and now with a collectible line, we get to see this retro look fully realized in 3D. Starfire is an especially striking example of how wonderful the Bombshells designs can be. Taking a very dramatic turn from her comic book or Teen Titans Go look, the DC Bombshells Starfire statues is as ready to start fires as it is to put them out. Done up in her best Firefight digs, you will immediately fall in love with this beautifully realized, classic rendition of a modern character. But to be more blunt, its LIT as hell.

Designed by Ant Lucia and sculpted using polyresin by Jake Mathews, Starfire stands poised 11.03″ and is ready to battle the flames she inevitably caused in a stunning, purple, black and white firefighters outfit. There is little not to love about these piece as the everything from the design to the details are eye-catching and undoubtedly gorgeous. From the sculpt itself to the choice of colors Starfire stands to impress everyone she comes in contact with. Its hard to pick what I love most about this design as from head to toe is nearly flawless and embodies the fun, retro vibe of the Bombshell line but without turning up the sexy too much. 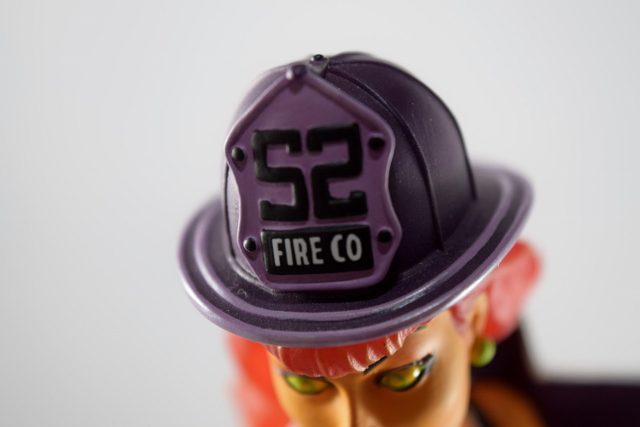 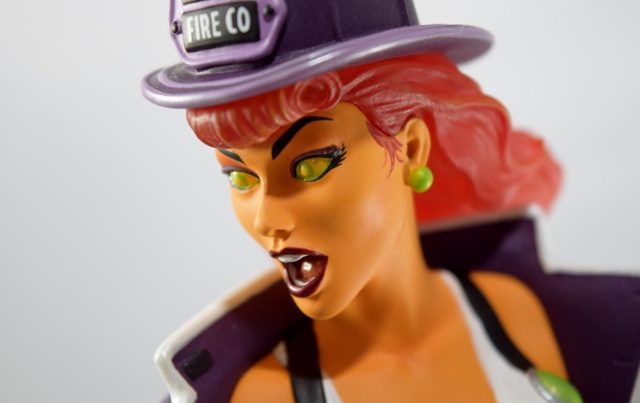 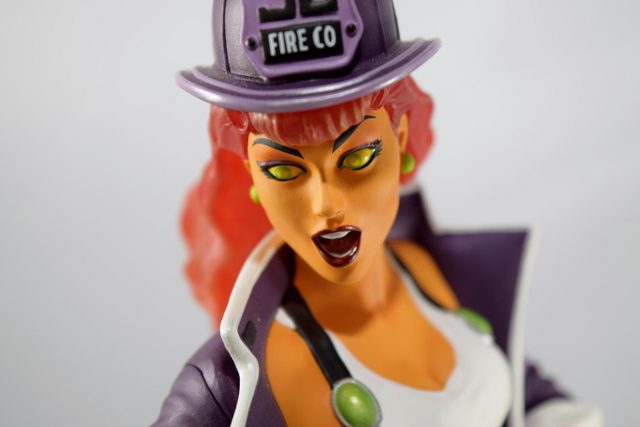 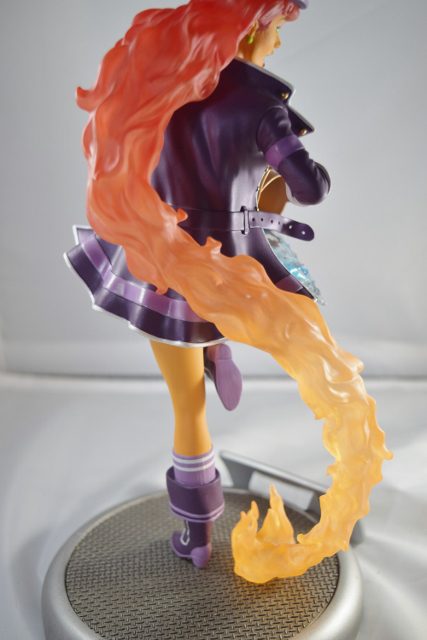 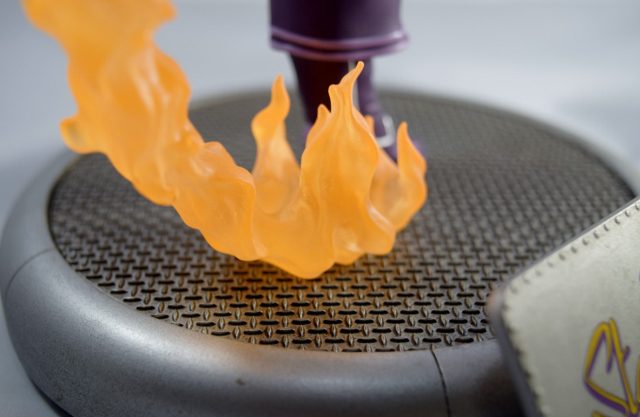 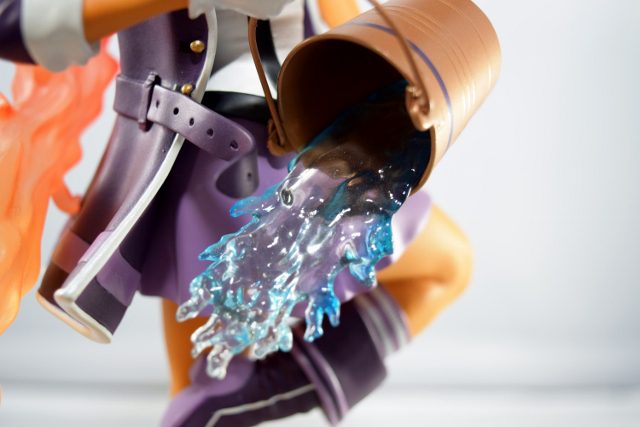 Starting at the top, the sculpt features the classic firefighters helmet with a fun detail for fanboys as the engine number is 52. As we move to hear face your hit with a flurry of color. Bright oranges and greens contrast her dark lipstick to fully express the surprised expression on her face. This is also the first time we see her hair, arguably the coolest part of the piece as its fiery wave winds down from top to bottom. Its color’s move from orange to yellow and become brighter in the light as the polyresin offers a bit of clarity. The hair as acts a bit as the centerpiece of the statue as it is not only striking but the fire it causes gives Starfire the purposeful pose she is in as she tries to put it out. This leads to another cool feature of this statue which is the bucket of water Starfire is dumping on her hair. It’s always awesome to see an action orientated effect like this as it adds that extra fun factor. Seeing the water expelling from the bucket but frozen in time is just plain cool. 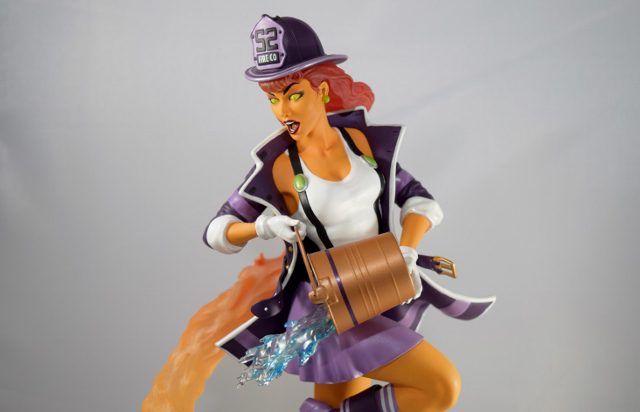 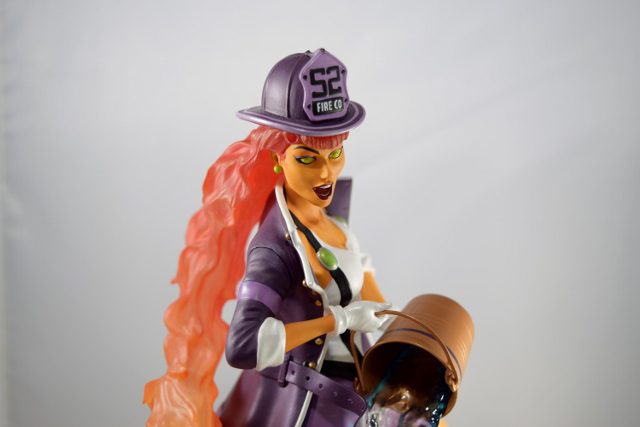 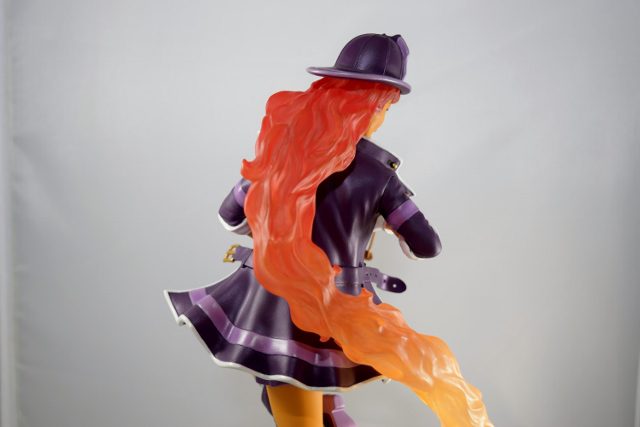 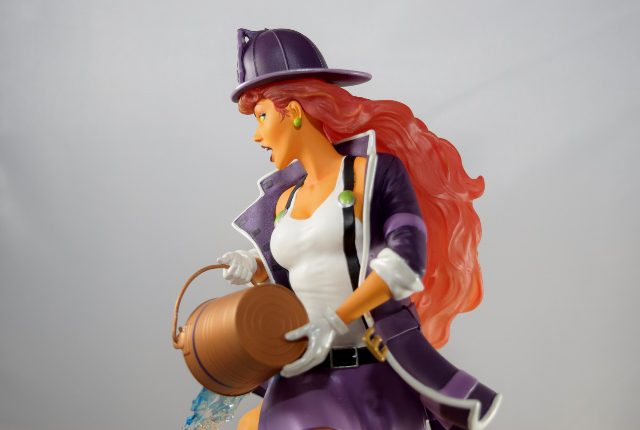 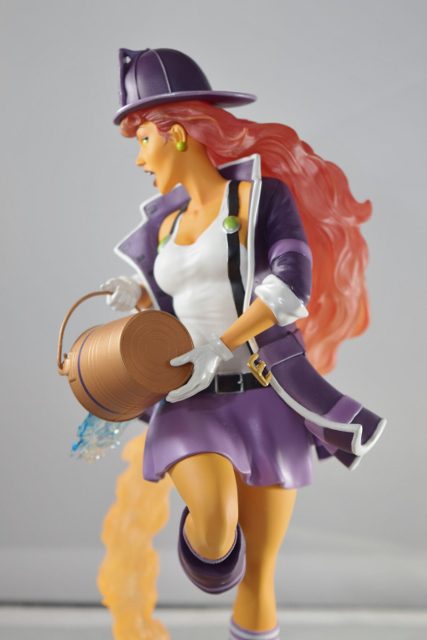 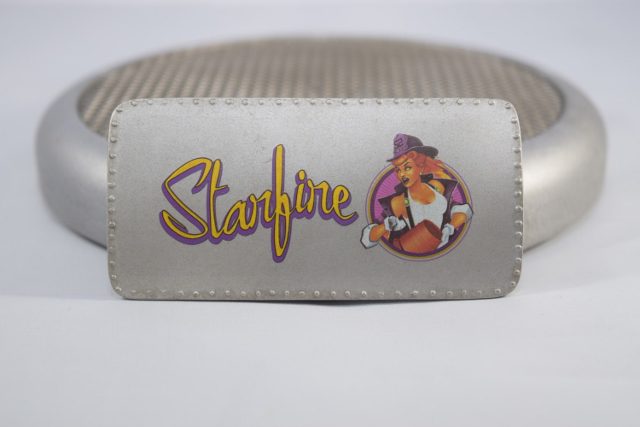 Back to the costume, the midsection features our hero dawning a white tank top and suspenders with a large purple with white trim firefighters jacket which flows lightly as she twirls to put herself out, literally. The statues bottom half features a short skirt that isn’t’ too revealing but maybe my least favorite part as it still feels a little petite. The skit does complaint the one let up poise she is making as its pale purple matches her orange skin and dark purple boats so well. The way color is used on this statue is really what sets it apart from me as we are technically on getting a few shades but they are used almost perfectly to create separation between cloths and skin as your eyes are flooded with orange and purple. 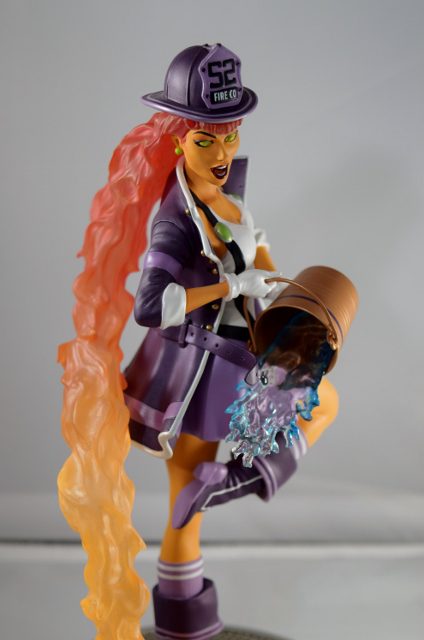 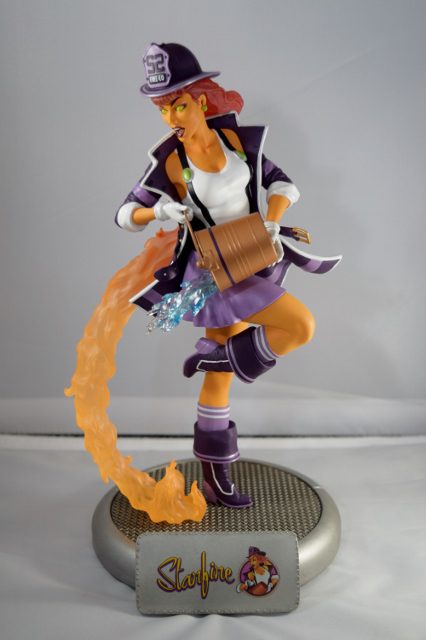 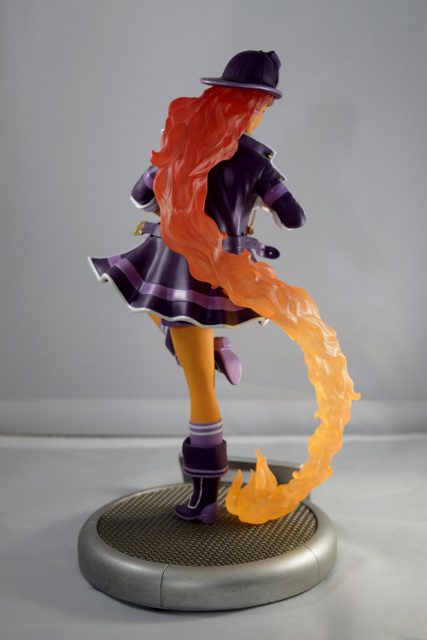 The DC Bombshells Starfire statue is on fire, to say the least. Everything about these piece screams “look at me,” and once you do you are captivated by colors, character and special effects. This is a must own for any fan of the character and will become the talking piece of your collection.