One of the biggest mysteries behind the incredibly successful and lauded DC Rebirth storyline will get the attention it deserves this April when the Batman and Flash creative teams take on a four-part story arc that looks to take on that mystery head on.

Geoff Johns had fans buzzing when he introduced this mystery at the end of DC Universe: Rebirth #1. The issue saw the return of the original Wally West to the DC Universe and also added a new mystery to the mix with Batman finding a mysterious bloody button lodged in the wall of the Batcave.  The Batman creative team of Tom King and Jason Fabok are teaming up with Flash writer Joshua Williamson and artist Howard Porter to take on that mystery in a four-part story arc starting this April in issues #21 and #22 of Batman and The Flash. 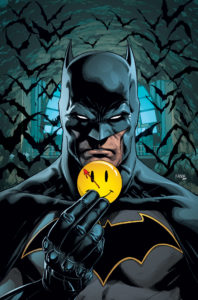 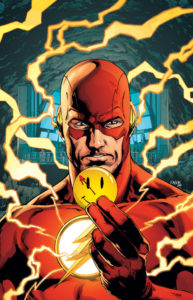 According to DC, this mystery titled “The Button”, will begin as a simple investigation between the Dark Knight Detective Batman and Forensic Scientist Barry Allen’s Flash. As they begin to unravel the mystery of the button, a new and deadly threat emerges from an unknown third-party. Who could it be? We all have our theories. With all the obvious allusions to the seminal story Watchmen, it’s impossible not to look to that world for a list of suspects.

Could it be the Mysterious Mr. Oz, whom many suspect to be Ozymandais? There is certainly evidence to suspect him in that he is removing people from the field who are getting too close like Tim Drake.

Could it be Doctor Manhattan? The energy used to destroy her certainly looks familiar to the way Doctor Manhattan dispatched Rohrshach. Certainly the clock motif points to the former Dr. Jonathan Osterman, son of a watchmaker. DC says that this mystery is “woven through time, and the countdown starts here.” These statements lend credence to the theory that Doctor Manhattan is intimately involved in these events.

Another theory, which in the world of comic books, might not be too far-fetched is that the button was placed in the Batcave by the last person who was in possession of it: Dan Dreiberg a.k.a Nite Owl.

“The Button” starts April 19. Check them out and let us know what you think. What are your theories? Who do you think is behind the Rebirth?

Have you seen this:
Morrison and Paquette return to Wonder Woman Earth One