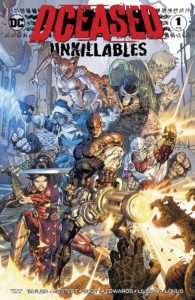 In the midst of the Anti-Life infection, separate groups of heroes and villains will fight to survive a world filled with death.

Like every infection, immunities are not uncommon among certain people and this one is no different. When Slade Wilson goes to take down a group of Nazis for a hefty paycheck, he discovers something strange. When he checks his phone for information, he is infected and wakes up days later with the infection purged from his system. He immediately goes looking for his daughter to try to rescue her from the hordes of demons.

At the same time, Jason Todd discovers the bodies of Batman and the others and immediately uses Bruce’s tech to discover the locations of any surviving members of the Bat-Family. As both groups fo searching for survivors, Gordon finds the terrible truth about his daughter as well as a group fo survivors and Deathstroke finds himself in the company pf Vandal Savage and a team of villains determined to survive what comes next. 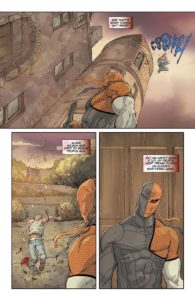 Tom Taylor does a great job diving back into this world with a story that feels fresh and interesting. The characters that Taylor chooses for this story are all intriguing both from a plot and character perspective. I was interested in how characters like Deathstroke and Creeper would fare in this environment and the inclusion of Vandal Savage was the icing on the cake. I can’t wait to see where this story goes next.

The art by Karl Mostert is great and I love the way he frames the action as well as the gore in the scenes.