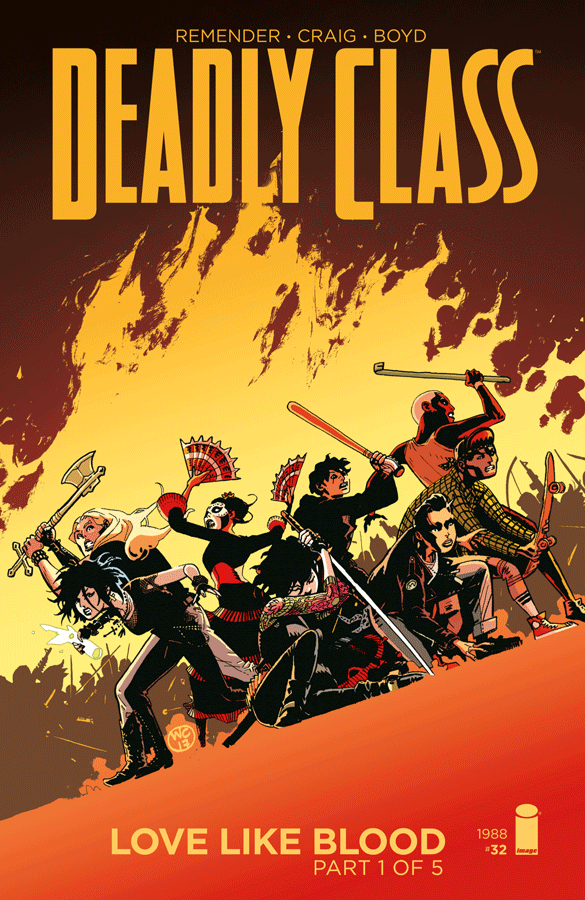 Deadly Class #32 is part 1 of 5 in the new arc after coming back from a short break since the last issue. We were left with quite the cliffhanger from the last issue with Marcus and his friends being surprised by many different people that have come out to kill him and along with anyone else that gets in the way. This is the first time we see Marcus fight for his life in a long time now and you can see that he’s a completely different person now when he fights. The fire in his eyes shows more determination than ever and you truly believe he will not lose. While Marcus is working on his own problems to let everyone else escape from Viktor and Brandy, Maria and everyone else have a whole gang to worry about outside while on the run.

Everything is happening so fast in the issue and it’s a major bloodbath. The amount of bodies that get piled up as everyone fights to escape and stay alive compiles quickly. It’s extremely thrilling to see because everyone is using whatever they can get their hands on and we get some fantastic action splash pages in the issue showing how they’re doing these massive takedowns against a couple of very large gangs. Maria also shows a lot of great strength in her as she’s the one giving orders and taking the lead to assure everyone does their part and live through all of this craziness.

It’s great seeing the art by Wes and Jordan in the series again as they’re able to give you a feeling of rush, uncertainty, and excitement. Even with all the mess made from the dead bodies, blood spilled, and weapons lying around everywhere, It’s never difficult to make out what is happening in the panels that get covered with these things. I love how loud the issue feels when guns are fired and when swords clash against each other. It’s complete madness as you soak up what’s happening to everyone whether they’re running away, fighting, or getting killed. The first issue of this new arc is delivering a rush of excitement and anticipation as you turn every page, leaving you anxious to see the outcome of Marcus, Maria, and everyone else. We don’t know who is going to die by the end of all of this, but we certainly do know that not everyone is going to live.

Deadly Class Image Comics Wes Craig
Are you an Insider?News, reviews, & updates are just the beginning.