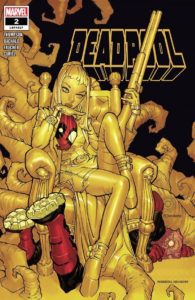 Everyone who knows Deadpool — like, actually knows the character — is well aware he’s more than just a comedic merc. There’s some depth to Wade Wilson. Especially emotionally.

Every once in a while, lets that side of him show. Usually a kid, particularly his, brings that out in him. But in Deadpool #2, Kelly Thompson offers a slightly different slant on “emotional Wade Wilson.” One we don’t often see.

(WARNING: Spoilers for Deadpool #2 ahead.)

It really seems like Deadpool isn’t taking this whole “King of the Monsters” title seriously. What a shocker.

But we find out in Deadpool #2 that’s not exactly what’s going on. Wade has finally found a group of he feels he truly belongs to. All of the monsters are viewed as lesser creatures because of their appearance. Of course, Deadpool isn’t exactly easy on the eyes. So when his surprise visitor, captain America, tries to appeal to Wade’s humanity to help smooth over the ongoing issue, Deadpool shows how he truly feels about his title and subjects.

But, Wade has a separate &^%*storm on his hands, thanks to Elsa Bloodstone and Dollar Store Kraven. Which might mean Deadpool #3 will have a lot of action.