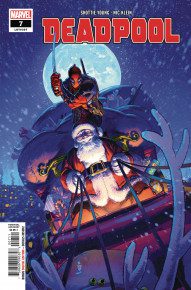 I think we all knew it was going to end one way for Santa Claus: his elves betrayed him, sending him into a drunken stupor, leading the children of the world to hire Deadpool to kill him. It’s almost like Clement Clarke Moore wrote Deadpool #7 himself (that’s the guy who wrote Twas the Night Before Christmas). I’ve heard he and Skottie Young get mixed up often.

In all seriousness, you know the world is really effed up when children hire a mercenary to kill Santa over presents. People say, “Hell hath no fury like a woman scorned,” well I’d argue differently. These kids were pissed off.

I’m pretty sure if you go back 5 to 10 years and Santa somehow goes missing, the kids of the world aren’t starting a “gopayme campaign” to hire a mercenary to take out ole St. Nick.

Thankfully, Deadpool is the one mercenary in the world with a semblance of a conscious. Could you actually imagine him killing Santa? I feel like there’s no coming back from that. Now, snapping his leg in half, that’s a different story—as disgusting as that compound fracture was.

The other thing that jumped out was how dumb Santa’s elves were. How do you fall for all the nonsense Tinsel was sharing? I mean, his name is Tinsel! That doesn’t sound like someone who really gives a damn about his fellow elf. And since when has Santa ever not done what’s best for everyone else. The dude travels around the entire world at night to make kids happy.