Leave it to Deadpool to bring back a comic tandem no one wanted to hear from again. In fact, I’d bet 89 percent of the people who read Deadpool #8 had to look up Silly Seal and Ziggy Pig while reading this or afterwards. But who doesn’t love obscure references that have nothing to do with nostalgias and pays homage to a comic book that hasn’t existed since the 1940’s and only appeared once in a comic book this century? (That other appearance was in 2009 alongside the Fantastic Four. Must’ve been a real page-turner.)

However, if there’s one thing Deadpool is good at, it’s creating interest in otherwise boring characters. (Actually, he’s much better at several things, but you get the point.) Though we don’t see Ziggy we get his much more nefarious cousin Zaggy, who’s using a Disney World-equivalent to run drugs and guns. (By the way, love how Skottie Young took a little shot at the actual Disney World, even though Marvel is now a Disney property.) This pig is bad news, and oh my, what a bloodbath his goons provided. If you’re just looking for senseless action in your comics—which most of us are if we’re reading Deadpool—this is like heaven.

However, the one thing that did throw a wrench in DP’s killing spree was his sweet, innocent daughter, Ellie, who he doesn’t recognize because of the whole mind-wipe thing. Not sure if we’ll see much of her going forward, probably not in the next issue or to, but she’ll certainly pop again at some point. (And hopefully, make Deadpool feel like an idiot for making those comments about her having daddy issues.)

Hopefully, Young doesn’t cut things short on this Zaggy v. Deadpool battle, because as mockable as it is, I would love to see how Wade roasts this hog. 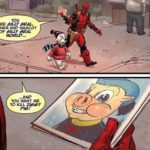