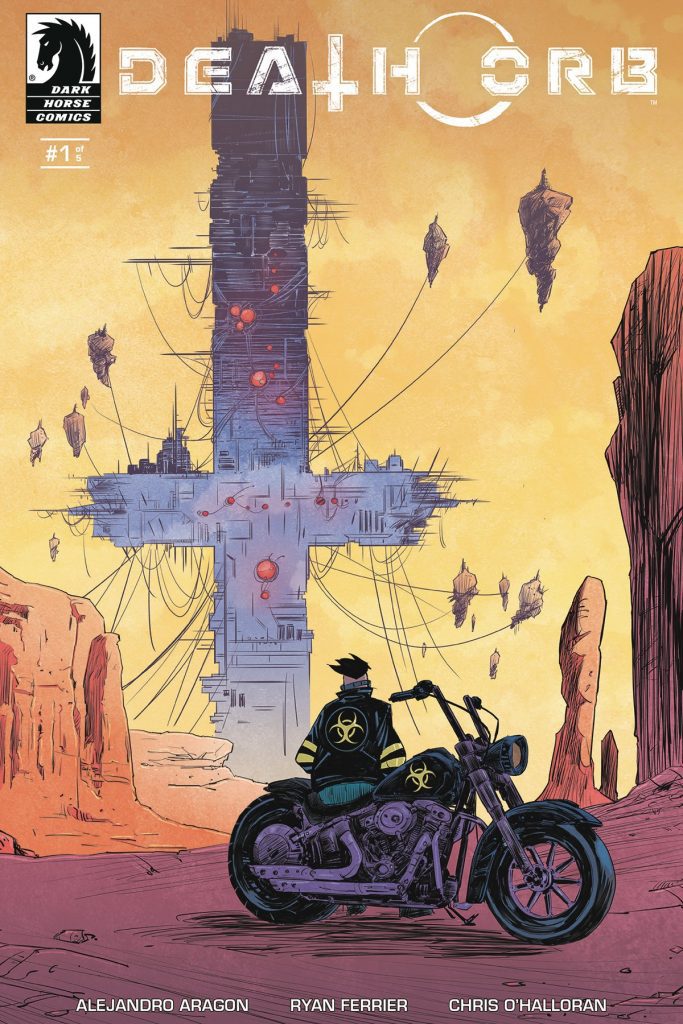 Alejandro Aragon and Ryan Ferrier have brought us a new mini-series called Death Orb. The setting is a Mad Max style where the world is in ruins and our main character is known as Rider. Rider is out searching for his wife who is pregnant. The opening starts off very strong as we see a bunch of men that were sent to kill Rider. This is one of the two main action set pieces we get in the issue and the way Rider comes off is great. You can tell he’s serious doesn’t let anyone get in his way regardless of who they are. There’s this moment after the fight where he has a conversation with the leader of his attackers and it ended up being my favorite part of the issue that runs along with the rest of it because of how great of a tone-setter it is.

Later in the issue we meet our antagonist and his plans aren’t entirely clear but it seems he wants to “cleanse” the world to make it better for everyone’s future. The rest of the issue we see Rider continuing his search for his wife while being chased a couple of times due to the bounty that’s on his head. He’s clearly been at this for a while where he’s being noticed and considering the mess he leaves at times, I’m not surprised.

The moment I opened the first page I was able to tell that I was going to really like this art teams style. We get this great image of a dark rainy setting outside of the bar that Rider is at and I love the color work here. Everyone looks pretty rough but that’s the intention due to the way the world is now and it really helps balance the book in it’s tone of being in a dark world while still being able to land some great humor in it. The paneling work is done really well to keep the book flow smooth, especially during the action panels. This issue is definitely going to be one of the memorable surprises for me this year. Death Orb is set to only be a 5-issue mini but this first issue does a great job landing in all the right places. We meet our protagonist with a clear goal, the tone is set very well, the art team nailed it, and it really ends with a bang!

Have you seen this:
The Falcon and the Winter Soldier Episode 3 "Power Broker" (Spoiler Review)