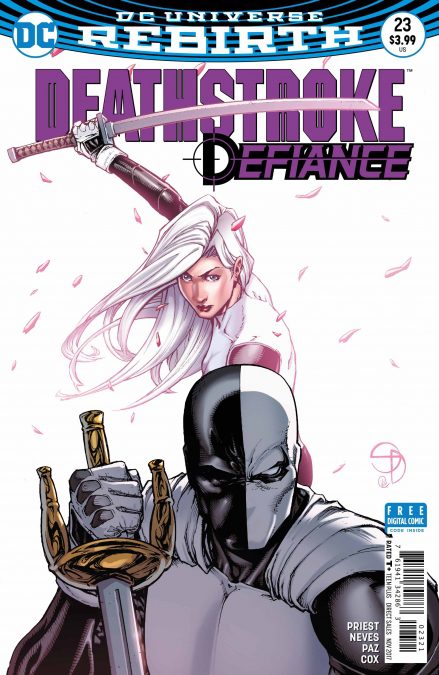 Deathstroke writer Priest layers his plots and his characters like body armor. Each layer of dysfunction overlapping the previous layer in an attempt to create a protective armor against attacks and emotion. Priest doesn’t leave Deathstroke or his family protected though. Each new story arc wove another layer of dysfunctional armor for Deathstroke, only to leave him more vulnerable than ever. A fight between father and daughter that ends in bloodshed. An emotional war of words between Slade’s son and ex-wife. On top of this dysfunctional, Priest is building Deathstroke’s non-lethal hero team Defiance.

After the events of Deathstroke #19 and Slade Wilson’s journey into the Speed Force, he has attempted to use non-lethal force and compiled a team filled with trainees and family members. The team may be a dysfunctional family, but they are developing into functional superheroes. How long this Defiance team holds together is still a question, but with the family drama that Priest has crafted, even when the team collapses, it will be well worth discovering how the family responds.

Have you seen this:
Crossover #1 (REVIEW)

In addition to field testing Defiance, Priest’s subplot with the Hmong and Chinese gangs continues to build and should eventually involve Slade’s 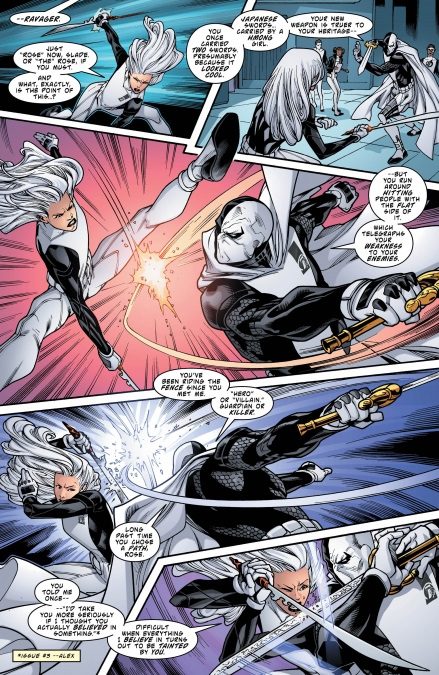 daughter. This is the same daughter that now has a time traveling connection with the Titans and Teen Titans from the Lazarus Contract crossover. Priest’s multi-layer family plots are matched by the multiple subplot threads, all of which is kept moving well-written dialog.

Priest’s dialog continues to be sharp, quick, and full of references. Fortunately for newer readers, the dialog is full of footnotes for previous issues. The self-referencing is not a crutch to avoid explaining, it is used effectively in this issue to engage both new and lapsed readers into understanding the layered world Priest has crafted. The challenge for new readers though is that all the references require a reader to slow down and piece together the character relationships and family tree. Because of this, Deathstroke #23 reads more like a spy novel than an action movie.

Readers seeking layered intrigue and complicated family dynamics will savor the layers Priest has created. Those looking for a flashy superhero title will need to invest some head space for Priest’s writing. Any reader who invests the time will find a lot to enjoy in the world Priest has cultivated. Issue #23 weaves layers of dysfunctional and enjoyment for new and returning readers alike.