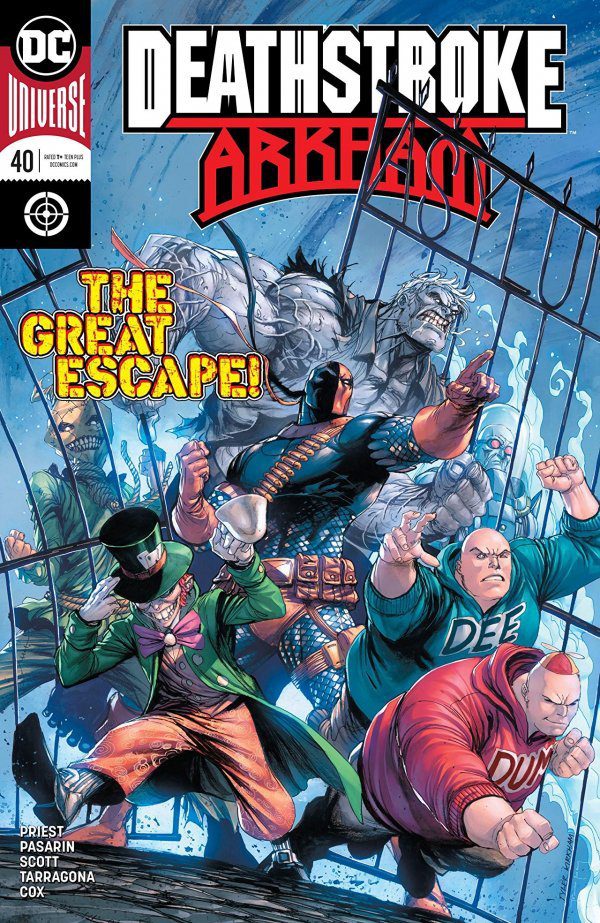 Deathstroke #40 can be broadly summed up in one sentence. Just when you think Christopher Priest has given you every answer, he finds another way to plant seeds of doubt.

The driving force behind Slade Wilson’s insanity in Deathstroke #40 is the loss of Dr. Candace Evans. She was his therapist and the closest thing he had to a friend at Arkham Asylum. Deathstroke was tricked into killing her in Deathstroke #39, and he’s not exactly pleased about it.

He doesn’t believe she’s dead. Everyone else keeps telling him she is dead. It’s impossible to know since there are around seven different ways to interpret what’s going on this issue

Given how Priest has handled the whole thing, he easily could have wrapped the story up with a shot of Slade in a straight jacket in his room at Arkham, with all the events of the series simply being hallucinations and nightmares of his own making. Honestly, it’s not like things finished off in a calming manor.

It’s not like the ending Priest gave us was any less confusing. He and Death Masque massacre some “Pulorians” who are apparently homeless people? But Death Masque gets teleported away somehow? And the bodies vanished from the morgue. This whole Deathstroke at Arkham run has been a weird trip

None of it makes sense. But it did give us some awesome action, which this issue is full of. Solid work from Fernando Pasarin & Carlo Pagulayan, as well as Jeremy Cox and the inkers.

Can’t gloss over the fact Huge Strange killed himself. Apparently, his whole plan to “help” Deathstroke was really a plan to get Slade to kill Strange. The guy is an absolute mess.