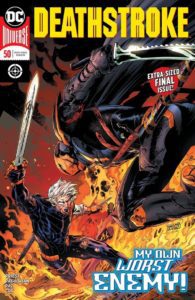 Christopher Priest is one of the best writers out there. No question about it. He’s consistent, yet unpredictable.

Not only is Priest’s 50-issue run with Deathstroke an outstanding representation of his talent, it’s also one of the best titles of the decade. DC Comics has churned out some quality stories recently, but none of them have been more compelling — for such an extended period of time — than Slade Wilson’s.

Also, Carlo Pagulayan and Fernando Pasarin did most of the penciling throughout the series. Their interpretation of Deathstroke, with his ikon suit, is the best yet. Whatever DC decides to do with the character going forward, it would be best if they stuck with something close to their design, as opposed to the clunky, tank-like suits Slade used to wear.

For those who weren’t able to hop on for the ride while the train was going, pick up the trades. You will not be disappointed.

(WARNING: Spoilers ahead for Deathstroke #50.)

Remember what I just said about Priest being both consistent and unpredictable? The ending of Deathstroke #50 was just that.

He really had me thinking Slade had been domesticated. I didn’t like the idea one bit. It didn’t seem believable. Wintergreen felt the same way.

Well, turns out we were both right. Excellent okie-doke by Priest.

Truthfully, had he ended the story with Nurse Deathstroke, it would’ve tainted the title for me.

There’s one thing that stood out to me most from Slade’s conversation with his alternate reality self. In comics, there are heroes, villains, and anti-heroes. Some have the “super” adjective, as well, but not all. Then there’s everyone else who’s trying to survive the constant chaos from the non-stop battles between the other aforementioned groups.

Over the course of 50 issues, Preist managed to put Deathstokre in a category of his own. He’s certainly not a hero. But he’s not exactly a villain either, because Slade has his code.

He’s very good at his job and does everything to maintain his consistent output. It just so happens what Slade is good at is killing people. If you think that makes him a villain, consider the fact he never takes any chance to become something more — at least as a villain, because he did have his whole Defiance run.

Maybe anti-villain is the way to label him. Or perhaps there’s another term more fitting.

Until someone else takes the reins, Deathstroke will have to do.