After the first two episodes vastly reintroduced our heroes, Episode 3 begins to escalate as we now begin seeing our heroes interact with one another and the puzzle pieces falling into place.

We get hints of Alexandra’s real identity, her objective in New York, and where Elektra plays into this entire series and events after her “death” in the second season of Daredevil. Alexandra, played by Sigourney Weaver, continues to steal every scene she is in. 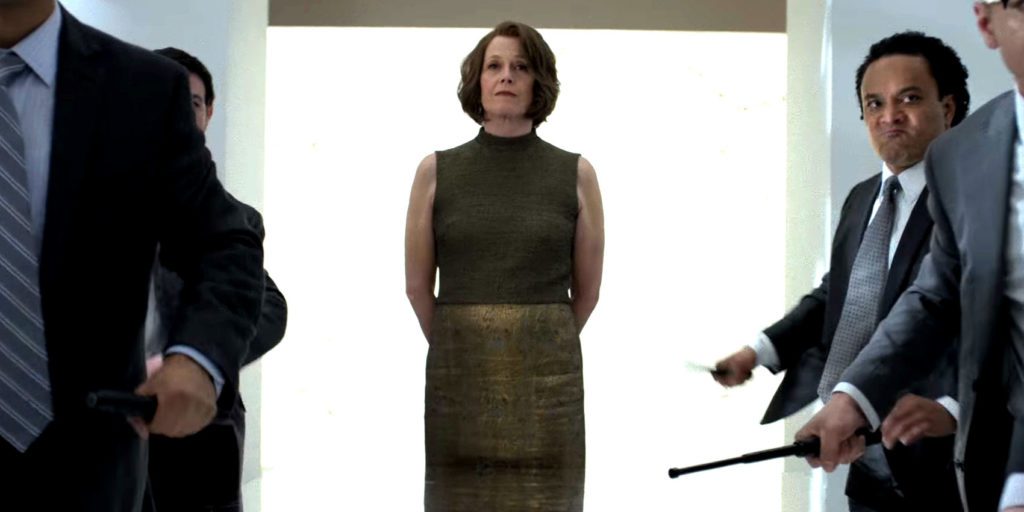 The highlight of this episode is the interaction between Luke Cage and Danny Rand. For those familiar with the comics know these two are great friends and form the Heroes For Hire. There are several moments of banter between the two, or as Claire describes it as a “pissing contest”. Both heroes seem to be stuck in their ways, unaware of the big picture in place. Claire acts as the liaison between the two. Basically the Nick Fury of the Marvel Netflix Universe. Danny seems to be just as naive as he was in his standalone series, meanwhile Luke is skeptical to any of the mythicism Rand reciprocates. In all honesty, Marvel, instead of an Iron Fist season 2, if you could give us a Heroes for Hire season focusing on these two, that would be great.

Jessica Jones and Matt Murdock share a bit of back-and-forth as well, as the two meet in a police station. Jessica, the most stubborn of the four, is unwilling to play ball with Murdock in the slightest. She also grows rather suspicious of him, and immediately goes into detective mode and trails Murdock which leads to some interesting events.

By the end of the episode, in one way or another everyone’s identity is revealed, all of our heroes are still just as confused as the beginning of the episode, the difference is that now they are aware of each other’s existence. The team team-up for the epic fight scene that has been shown with each Defenders trailer that has been revealed to-date. If this is a small taste, what kind of action scenes are to come, then sign me up. It’s a shame we couldn’t get this from the start, especially with a limited 8 episode run.

Have you seen this:
THE WITCHER: WITCH`S LAMENT #4 (REVIEW)

Although we are only into the 3rd episode, it is the most action packed yet. Here is where we begin to pick things up and the team slowly begin to discover that what is at hand (see what I did?) is much bigger than any of them individually.